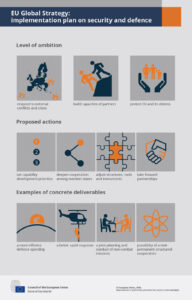 Now freighted with evidence of mass atrocities and war crimes, the Russo-Ukrainian war is the strongest geopolitical and moral earthquake in Europe since the Cold War. The effects will thus be of a similar magnitude, notes Mason Richey, Hankuk University professor of international politics.

The European Union’s updated 2016 Global Strategy (in)famously replaces democracy promotion abroad — outlined in the 2003 European Security Strategy — with support for the creation of “resilient” states in the European Union’s neighborhood, he writes for War on the Rocks:

Pragmatic realists see this as recognition of an increasingly dangerous world and the failure of democracy promotion in the Middle East, North Africa, and Europe’s eastern flank (including Ukraine). Cynics see this as European support for corrupt, illiberal “buffer” states. Regardless of nomenclature, the question was always the trade-off between resilience and redlines: how much illiberalism and authoritarianism would the European Union tolerate to support “resilient” states in its neighborhood in the name of geopolitical stability?

The European Union now faces the same choice internally with respect to Poland and Hungary, Richey adds: how much democratic backsliding can Brussels tolerate in order to assure the resilience and stability of two important eastern flank states on the front lines of the return of great-power politics? RTWT