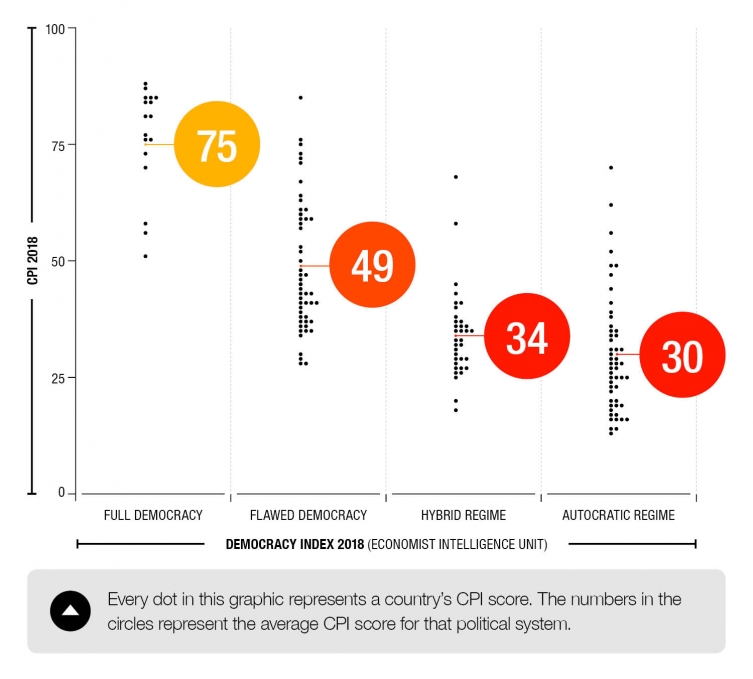 While no country gets a perfect score on the Corruption Perceptions Index (CPI), the top performing countries tend to be healthy democracies. The state of democracy in a country indicates how successfully public sector corruption is controlled, Transparency International observes:

This link might seem obvious, but when we analysed the CPI’s public sector corruption data against well-known and robust democracy indexes, we saw a strong relationship between the effective control of corruption and “full democracies”, as defined by the Democracy Index (above). Even “flawed democracies” performed, on average, better than countries considered to be “hybrid regimes” (with both democratic and autocratic elements) and “autocratic regimes”….Democracies have the necessary checks and balances, like judicial independence and political rights, for sustainable and comprehensive anti-corruption plans. Without them, countries cannot expect to tackle corruption effectively.

What lies ahead for Sudan’s former dictatorship? Mai Hassan and Ahmed Kodouda discuss mass protests, a military coup, and the prospects for democracy in Sudan, while Sara Goodman reviews Sheri Berman’s Democracy and Dictatorship in Europe, in the National Endowment for Democracy”s Journal of Democracy.

At a forthcoming event, Daniel Drezner will argue that in advanced industrialized democracies, several national trends—the erosion of trust in elites, the rise of political polarization, and the retreat of the legislative branch from foreign policy—have undercut the ability to fashion a viable grand strategy. Jude Blanchette will discuss China’s approach to grand strategy, including Beijing’s systemic advantages and disadvantages for Beijing’s ability to formulate and execute a grand strategy.