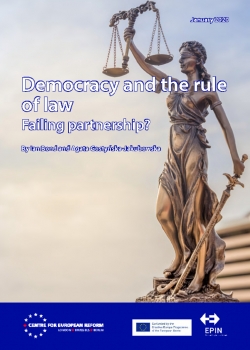 Democracy and the rule of law are often mentioned in the same breath, as though there were little difference between them, analysts Ian Bond and Agata Gostyńska-Jakubowska suggest.  But the last decade has shown that not to be the case. Democratically-elected governments may want to act in ways that command the support of their voters, but find themselves blocked by courts or other independent institutions that act as guardians of the rule of law, they write in Democracy and the rule of law: Failing partnership?:

Western states are also liberal democracies – that is, the power of the people or their representatives is to some extent limited by rules and institutions, In such states the power of the majority is balanced by the separation of the executive, legislative and judicial functions of the state, and by the rule of law. The rule of law is designed to protect both the system itself (for instance, to prevent a legislature voting to abolish future elections and give itself permanent power) and the liberties of individuals (for instance, to protect private property against arbitrary confiscation).

According to the European Commission for Democracy through Law – the Council of Europe’s advisory body on constitutional matters, known as the Venice Commission – the rule of law has six elements, Bond and Gostyńska-Jakubowska observe:
 legality, including a transparent, accountable and democratic process for enacting law;
 legal certainty (people know what the law is and how the courts interpret it, and neither will change unpredictably);
 prohibition of arbitrariness (the exercise of power cannot be unlimited);
 access to justice before independent and impartial courts, including judicial review of administrative acts;
 respect for human rights;
 non-discrimination and equality before the law.

EU institutions should make greater use of civil society organisations, they contend in an analysis for the Centre for European Reform:

A version of this paper will also appear as a chapter in ‘Deliberative democracy in the EU’, to be published by Rowman & Littlefield International later in 2020 as part of the project ‘Towards a Citizens’ Union’ (2CU), of the European Policy Institutes’ Network (EPIN), co-funded by the Erasmus+ Jean Monnet Programme of the European Commission. RTWT