…. is the question addressed by a broad pool of experts and generalists in the May/June 2018 issue of Foreign Affairs, in which democracy is the lead package.

Among those who strongly agreed with the proposition that that democracy has indeed lost its appeal, Omar G. Encarnación, Professor of Political Studies at Bard College, said “I think the global appeal of democracy was always overstated and often confused with the loss of legitimacy of non-democratic forms of government, such as military rule.”

In advanced democracies, leaders no longer promote democratic values as their predecessors once did. And the publics they represent are themselves less committed to democracy. In certain key countries, including the United States, publics are divided into intolerant communities that will happily endorse undemocratic procedures, provided these bring harm to rivals.

“Democracy surely never had much appeal for ‘strongmen’ who seem ascendant in various parts of the world.” But, she added, “I am concerned that the structures and processes that enable fulfillment of those aspirations may be eroding and that there is a lack of international leadership in countering that erosion.”

“It’s not that democracy per se has lost its appeal: it’s that there is a general resentment of non-responsive elites and ossified political party systems that generate policy consensus but do not address popular grievances,” said Stanford University’s Anna Grzymala-Busse (left), strongly disagreeing with the proposition. “Citizens are still voting, and they are demanding more from democratic systems and their representatives: whether the newly elected can deliver is another matter.”

Citizens of many democracies are very frustrated with their governments but most are not giving up on a basic belief in democracy as the most desirable political system, said Thomas Carothers, Senior Vice President for Studies at the Carnegie Endowment for International Peace. Many autocrats continue to try to legitimate their regimes using some democracy processes and institutions, albeit compromised ones.

Established parties have lost their appeal in many countries, and people across the globe are often deeply dissatisfied with the performance of their elected leaders, but people in most countries still support most basic democratic institutions and freedoms, added Nancy Bermeo, Senior Research Fellow at Nuffield College, Oxford University. RTWT

The global antidemocratic challenge is highlighted in the latest issue of the National Endowment for Democracy’s Journal of Democracy, in which Michael J. Abramowitz and Sarah Repucci report the troubling findings of Freedom House’s survey for 2017.

More and more people in the West are losing faith in democracy. And the younger they are, the worse the trend, the World Economic Forum adds:

Harvard lecturer Yascha Mounk and Roberto Stefan Foa, a political scientist at the University of Melbourne in Australia, have published a study which looks at decades worth of data on attitudes towards democracy, revealing some alarming results.This chart (below), published in the New York Times, shows a systematic decline in the percentage of people who think that it is essential to live in a democracy, depending on what decade they were born in. 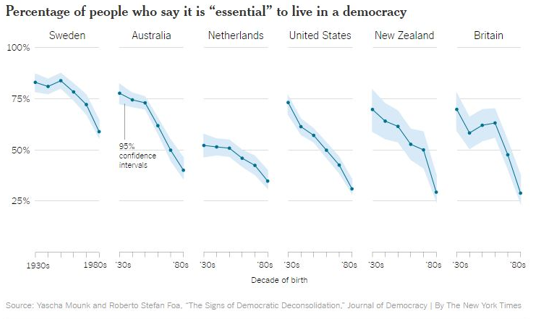