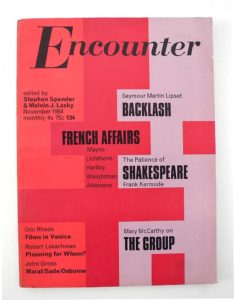 It is almost 30 years since the demise of Encounter, the London-based monthly review of culture and politics, but no other magazine has since come close to matching its influence, Gerald Frost writes for the Critic (April 2020):

No other publication can claim to have so consistently exposed the nature of communist ideology with such elan, or to have provided encouragement and a safe haven for those who found themselves isolated or threatened by the Marxists’ long march through the institutions in the West; or to have offered such a bright beacon of hope to dissident intellectuals in Eastern and Central Europe at a time when freedom and democracy in those countries were seemingly impossible goals. (HT: former NED Penn Kemble fellow Christopher Wall). RTWT

Democracy’s Defenders offers a behind-the-scenes account of the little-known role played by the U.S. embassy in Prague in the collapse of communism in what was then Czechoslovakia, Brookings adds:

Featuring fifty-two newly declassified diplomatic cables, the book shows how the staff of the embassy led by U.S. Ambassador Shirley Temple Black worked with dissident groups and negotiated with the communist government during a key period of the Velvet Revolution that freed Czechoslovakia from Soviet rule. In the vivid reporting of these cables, Black and other members of the U.S. diplomatic corps in Prague describe student demonstrations and their meetings with anti-government activists. The embassy also worked to forestall a violent crackdown by the communist regime during its final months in power.

Edited by Norman L. Eisen, who served as U.S. Ambassador to the Czech Republic from 2011 to 2014, Democracy’s Defenders: U.S. Embassy Prague, the Fall of Communism in Czechoslovakia, and Its Aftermath contributes fresh evidence to the literature on U.S. diplomatic history, the cold war era, and American promotion of democracy overseas.

China and Russia are exploiting the coronavirus in an attempt to reverse the results of the Cold War, Oleksandr Danylyuk contends. Over the past month, China and Russia have not only used the same narratives synchronously but also logistically supported each other’s influence operations not only through official state propaganda channels but also through the use in the West of covert tools controlled by the special services of these countries: media, opinion leaders, NGOs, trade unions, think tanks and political establishment representatives, he writes for the International Policy Digest.