In 2015, the year after his party won the two-thirds majority he needed to overhaul Hungary’s constitution, Viktor Orban said: “We are experiencing the end of all the liberal babble. An era is coming to an end,” the FT’s Edward Luce reports:

Orban has tilted Hungary’s electoral system against opposition parties and shown how to win super-majorities without a majority of voters. In the country’s 2018 elections, Fidesz won 67 per cent of the seats with 49 per cent of the vote. Orban’s governance model is even more relevant. Having secured a stranglehold on power, he has parcelled out EU-funded largesse to allies on a grand scale. Almost half of Hungary’s public contracts have just one bidder.

The rise of illiberalism is one reason why….

Liberal democracy feels as though it’s in a pretty bad way, and in many places, it is, says Eliot A. Cohen, a professor at Johns Hopkins SAIS. No competing advanced ideologies as comprehensive and lethal as Nazism or communism are on offer, although that could conceivably change.

“In the contemporary world, there are, practically speaking, no alternative ideologies,” argues Russian political scientist Dmitri Furman, citing the Kremlin’s ‘imitation democracy’ as a hybrid blend of democratic forms and authoritarian reality.

What is certain is that dictators, whether Xi Jinping or Ayatollah Khamenei, Vladimir Putin or Kim Jong Un, have at their disposal devastating weapons of precision repression and murder. The repeated and generally successful crushing of dissident individuals and movements in their countries and elsewhere is remarkable, Cohen writes for the Atlantic. Even a profoundly corrupt and incompetent regime, such as that of Nicolás Maduro of Venezuela, can hang on despite multiple internal and external pressures, partly with the transnational assistance of governments and corporations eager to help. It could get worse.

Governments like those in Nicaragua, Venezuela and elsewhere that reject political pluralism are ready to go to great lengths to pretend to embrace democracy — primarily by imitating the crucial rituals of periodic elections, the Times reports.

“This is a dramatic escalation of systemic repression which we haven’t seen in Latin America since the 1980s,” said Michael Shifter, president of the Inter-American Dialogue. “There is still a desire on the part of regimes to have a fig leaf of democracy, however not credible that is.”

And yet hope for democracy can be found in the most unlikely places, says Carl Gershman, former president of the National Endowment for Democracy (NED). He talks to Moisés Naim about his experiences in over 20 years of advocating for democracy. 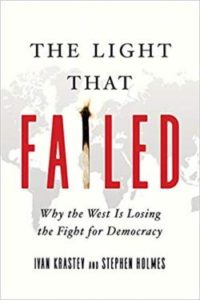 Elections have been turned into spectacles that create the illusion that Russian voters can play a role in politics, Ivan Krastev and Stephen Holmes observed in their book “The Light That Failed: Why the West Is Losing the Fight for Democracy,” the Times adds. They can also test the national mood, district by district, and allow the Kremlin to measure the loyalty and competence of their local officials.

“Rigging an election also allowed the government to mimic the authoritarian power that it did not actually possess,” they wrote. “In Putin’s first decade in power, organizing a pseudo-election was like wearing sheep’s clothing to prove that you are a wolf.”

“It is not just about loyalty, but also about who is effective. Elections give you new tools to measure performance,” Holmes told the Times.

“Politics is about promising and disappointing and managing the disappointment,” he added. “The special magic of democracy is that, although a lot of people may be disappointed, they have a hope that at the next election, they can bring in another group. By giving up the idea that another group can come to power, a lot of pressure builds up.”

Toomas Hendrik Ilves, who as president of Estonia led his small nation to become among the most digitally savvy countries, said his greatest fear now was the rise of “deep fakes,” the ability of bad actors to create a false video — say one showing a politician receiving a bribe — that is indistinguishable from the real thing, he observes in World Review: The State of Democracy.

We know that freedom around the world, measured in various ways, has been in decline for a decade or more, adds Cohen, the author most recently of The Big Stick: The Limits of Soft Power and the Necessity of Military Force. What Roosevelt and his enlightened Republican opponents understood is that American liberties would be profoundly less safe in an illiberal world. If America succumbs to its internal divisions, to its preoccupation with partisan feuding and its desire to withdraw from international politics, the world order, such as it is, will crumble, he warns. RTWT

“Resilience and Renewal” will remain a realistic prospect so long as there are people — like Wai Wai Nu, the 34-year-old founder of the Women’s Peace Network in Myanmar; Svetlana Tikhanovskaya, the self-exiled Belarusian opposition leader; and Ai Weiwei, the Chinese artist and activist — who understand that democracy requires unceasing attention and sacrifice, the Times adds.