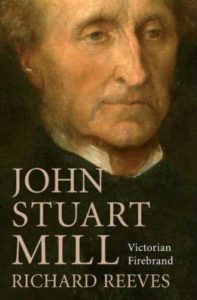 Over at The New York Times, David Brooks holds up John Stuart Mill, the second in a Heroes of Democracy series, for demonstrating that “democratic citizenship is a way of life, a moral stance and a humanistic adventure.”

“He championed the egalitarian belief that the best society allows maximum space for each member to craft his own life, but he had the civilized belief that there are clear distinctions between honor and dishonor, excellence and laziness,” Brooks adds:

His example cures us from the weakness of our age — the belief that we can achieve democracy on the cheap; the belief that all we have to do to fulfill our democratic duties is be nice, vote occasionally and have opinions. Mill showed that real citizenship is a life-transforming vocation. It involves, at base, cultivating the ability to discern good from evil, developing the intellectual virtues required to separate the rigorous from the sloppy, living an adventurous life so that you are rooting yourself among and serving those who are completely unlike yourself.

Social capital is not always strong enough to empower people who are alienated and excluded from decision-making. Civil society is often uncivil, notes Ryusaku Yamada, Professor of Political Theory at Soka University. History tells us that the so-called democratic political system does not guarantee the improvement of democratic society. Karl Mannheim, for example, who analyzed mass society in the age of fascism, worried about an irrational democracy of emotions, he writes for The Conversation:

Mannheim was an advocate of social education (a concept similar to citizenship education today), which is meant to make the attitudes and behaviours of both common people and elites more democratic…..For Mannheim and some of his contemporaries like John Dewey, T.S. Eliot and A.D. Lindsay, democracy is not only a political system but also a way of life. Citizenship education is not only a matter of school education but also of people’s social practice in their everyday lives.