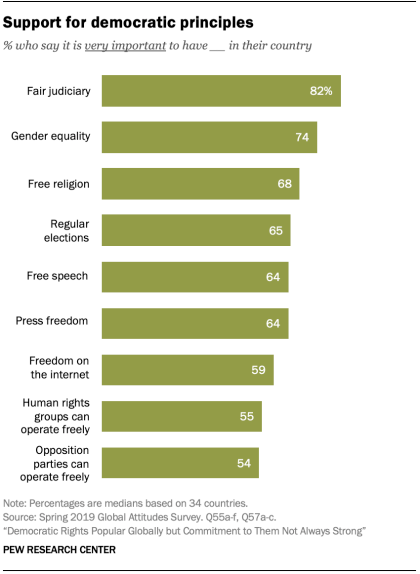 While democracy remains a popular idea globally, average citizens’ commitment to democratic principles is not consistently robust, according to a new 34-nation Pew Research Center survey.

Overwhelming majorities say the democratic principles tested on the survey are at least somewhat important. However, a stronger measure of commitment to democracy is the share of people who say it is very important to have these things in their country. Often, underwhelming percentages describe democratic rights and institutions as very important, note Pew researchers Richard Wike and Shannon Schumacher.

Around the globe people make distinctions between the various principles tested – while a median of 82% across 34 nations say it is very important to live in a country where the judicial system treats everyone the same, fewer say the same about having a political system that allows human rights organizations or opposition parties to operate freely, they note:

As previous Pew Research Center studies have shown, people who are dissatisfied with how democracy is functioning are often less committed to representative democracy, and one important driver of dissatisfaction with democracy is frustration with political elites. In the current survey, a median of 64% across the countries polled believe elected officials do not care what people like them think. And, in nearly every nation surveyed, those who think politicians don’t care about average citizens are more likely to be dissatisfied with the way democracy is functioning in their country.

The nine democratic rights and institutions tested on the survey receive widely different levels of support from global publics, Wike and Schumacher add:

There is general support for the three forms of free expression tested on the survey – free speech, freedom of the press and freedom on the internet – although the strength of that support varies cross-nationally. …..Having a system where civil society organizations such as human rights groups can operate freely (a median of 55% say it is very important) and having freely operating opposition parties (54%) are the two lowest-rated principles. RTWT

*Join the @NEDemocracy‘s four Core Institutes @IRIglobal @NDI @SolidarityCntr @CIPEglobal  for a discussion on eliminating gender-based violence and harassment in the world of work. @Eventbrite 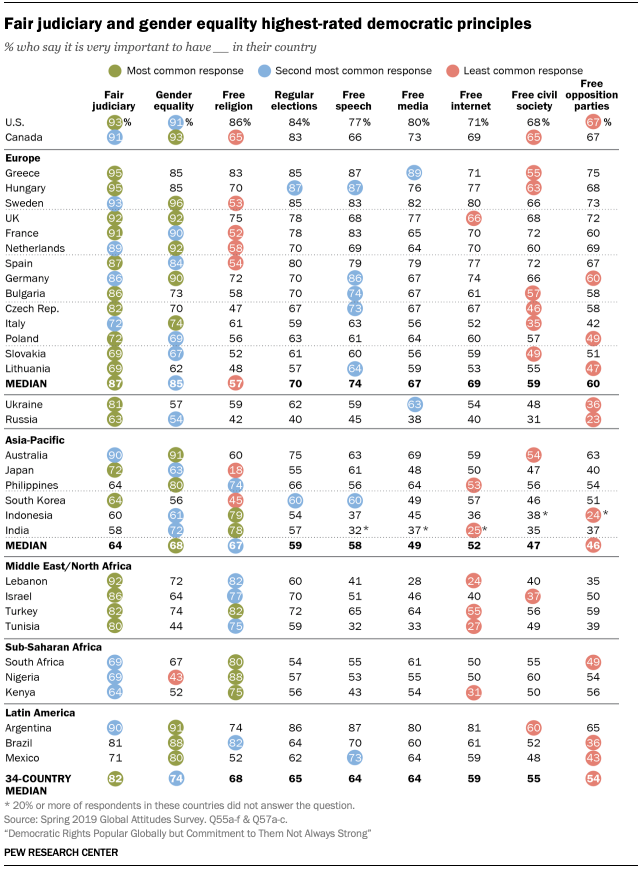