As noted in our 2017 report Sharp Power: Rising Authoritarian Influence, the success of the leading authoritarian regimes can in large part be attributed to the exploitation of a blatant asymmetry, they add: “At a time of intense globalization, the regimes in Russia and China are establishing barriers against external political and cultural influences in their own country at the same time as they abuse the openness of democratic systems abroad.”

The success of authoritarian narratives is evident in a new report which finds that the majority of Serbian citizens believe Russia and China have had a positive influence while the US, European Union and NATO to have been negative, Euractiv reports. Even in areas like donations and assistance to Serbia, where the EU, followed by the US, lead the field, citizens believe aid from Russia and China was greater, according to public opinion research from the Belgrade-based Center for Free Elections and Democracy (CESID) and the International Republican Institute (IRI).

Unless the U.S. stands for democratic values and seeks to empower people to achieve democratic results, we weaken ourselves fundamentally, argues Douglas E. Schoen, the author of, “The End of Democracy? Russia and China on the Rise and America in Retreat.” 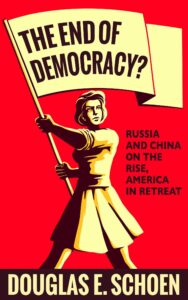 The Checklist to End Tyranny in the book, Is Authoritarianism Staging A Comeback?, provides specific steps that dissidents and activists might take to produce democratic change and defeat totalitarian leaders through non-violent civil resistance, he writes for the Hill.

With the possible exception of Afghanistan, where Biden’s decision to end the two-decade US war has been hotly debated, few link democracy’s woes to the current occupant of the White House, AFP adds.

“Democracy takes literally decades to consolidate and it takes years to erode. So I think there’s very little that any administration could do in the first nine months tangibly moving the needle on global democracy,” said Carnegie analyst Frances Z. Brown, who worked on supporting democracies in Barack Obama’s White House.

What can democratic societies do to keep their standards high and resist censored attacks by authoritarian powers who are making ever more costly efforts to override basic democratic rules? the NED’s Walker and Ludwig ask:

The economic blow from Covid-19 and China’s global influence have hastened the democratic decay, said Jonathan Powell, an expert in civil-military relations at the University of Central Florida.

“When you have countries that are already dealing with a very delicate balance between authoritarianism and attempting to maintain some form of democratic stability, when you have some sort of a shock to the system, even if it doesn’t necessarily seem as bad as what some other countries are dealing with, it can really have a critical impact,” he told AFP.

As for the alternative ‘China Model‘……

“It’s not on the scale that we would have had during the Cold War with the Soviet Union,” Powell said. “But it is a similar dynamic where if you do have one side cut off military or economic assistance, there is a foregone conclusion that you can go to the other side.”