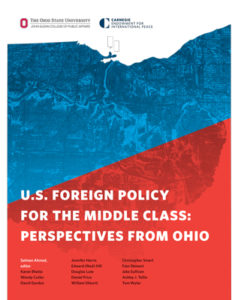 Many across the political spectrum are arguing for reinvigorating the Western alliance to contend with resurgent geopolitical competition with China and Russia. But they appear ambivalent, conflicted, or divided over the core tenets of previous U.S. strategies to unite “the West,” argues a recent report from the Geoeconomics and Strategy Program at the Carnegie Endowment for International Peace:

These core tenets once included leaving no doubt about U.S. security guarantees for allies; actively supporting a Europe that is whole, free, and at peace; strenuously defending democracy and human rights; leading and maintaining a united front in international institutions to advance shared interests and values; and promoting free trade. RTWT

Differing approaches to advancing democracy are rooted in the underlying sources of disagreement over U.S. grand strategy which center on differing conceptions of the roles of power and domestic and international institutions in foreign policy, analysts Paul C. Avey, Jonathan N. Markowitz, and Robert J. Reardon* argue in Disentangling Grand Strategy: International Relations Theory and U.S. Grand Strategy, an article for the Texas National Security Review.

A grand strategy based on a conception of restraint does not count democracy promotion or humanitarian intervention among its objectives, the authors contend:

Restraint does not oppose democracy or foreign aid, but its proponents believe that promoting either is inappropriate as part of a grand strategy. Whereas democracy promotion is difficult and unnecessary for advancing U.S. interests, humanitarian interventions can create failed states, generate havens for terrorists, and invite diplomatic backlash. A number of alternative diplomatic and foreign aid initiatives may, in the end, be more effective and save more lives.

“Deep engagement supports the spread of democracy but does not view it as a grand-strategy objective because overt democracy promotion can undermine support for other U.S. objectives,” the authors add. “Efforts to protect human rights through humanitarian intervention or democracy promotion distract leaders from core objectives and may lead policymakers to pursue unnecessary or impossible objectives, squander resources, and produce negative externalities.”

A third strategic approach – conservative primacy – prioritizes the spread of democracy and opposition to authoritarian regimes, the paper contends:

Unlike liberal internationalism, which argues that democracies can resolve conflicts of interest through peaceful negotiation, conservative primacy holds that maintaining a U.S.-led international order is a globally shared interest and that democratic governments best channel popular support for U.S. hegemony.

Conservative primacy, like its liberal counterpart, favors the promotion of an international order based on liberal characteristics; in particular, the spread of democracy, capitalism, and free trade. As Condoleezza Rice put it, “An international order that reflects our values is the best guarantee of our enduring national interest.”

It’s imperative to cut through the conceptual confusion that clouds strategic debate by clearly delineating interests, objectives, and policy levers, the authors suggest.

Tomorrow: Advancing Democracy and The Future of Progressive Foreign Policy.

Thursday: Advancing Democracy and The Future of Conservative Foreign Policy.