Around the world, democracy is threatened by the emergence of authoritarian, illiberal and nationalist leaders who are suppressing independent media and civil society. Identity politics are partly to blame, Stanford’s CDDRL Director Francis Fukuyama* contends in his book, Identity: the Demand for Dignity and the Politics of Resentment.

What begins as a drive for “recognition and respect” through group membership can generate negative consequences, he argues, because “liberal democracy is based on individuals, not on group memberships.”

Forging identity was critical to the formation of the modern states, says James C. Scott, author of “Seeing Like A State: How Certain Schemes to Improve the Human Condition Have Failed.” 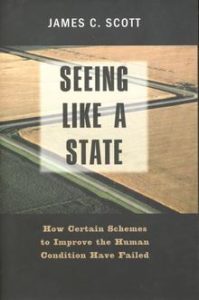 The pre-modern state was, in many crucial respects, particularly blind. It knew precious little about its subjects, their wealth, their landholdings and yields, their location, their very identity. It lacked anything like a detailed “map” of its terrain and its people, The Economist notes:

The building blocks of a functioning society that people in the rich world mostly take for granted—permanent surnames, street numbers and addresses, standard units of weights and measurement—all came from attempts to draw such maps and thus make the world legible, as Mr Scott put it, to its states.

Scott identifies four factors that contribute to the failure of “schemes to improve the human condition”:

“India fulfils the first two conditions and, under the Hindu nationalism of Narendra Modi, the prime minister, it is worryingly close to meeting the third,” The Economist adds.