Democracy is declining or under threat all over the world, not necessarily in every country but in every region, in rich and poor countries, old and new democracies, Blake Hounshell and Max Fisher observe in The New York Times. And the decline is incremental but steady, which means that the scale of the change isn’t necessarily obvious until you start looking at the data.

More democracies are in decline today than at any other point in the last century, according to a democracy monitoring group called V-Dem, and much of the demise can be attributed to populist backlash against liberalism, Fisher suggests. Political scientists Pippa Norris and Ronald Inglehart tracked every election in Europe, at every level, going back decades and found that populists have been receiving a steadily larger share of the vote, on average, basically every year since 1960, he adds. That year is important because it’s roughly when Western countries, as the colonial era ended, collectively began to embrace what we now think of as full, liberal, multiracial democracy. And that is also the moment, it turns out from this research, when populist politics began steadily rising in a backlash to that new liberal-democratic order.

It seems like the clear lesson of the last couple of decades is that an alternative — white nationalist, Christian, patriarchal, antidemocratic, authoritarian — seems compelling to many around the world. How does success in Ukraine put any dent in that? The Post’s Greg Sargent asks Stanford’s Francis Fukuyama:

Fukuyama: First of all, there is no modern democracy in which that type of voter is predominant. The problem is that the opponents of these populist nationalists have not organized broad enough coalitions. They’ve not been able to formulate an alternative that is sufficiently appealing.

But the potential is there, because they’ve got the majority of votes. I do think a catalyzing moment of democratic success could be inspiring.

In his latest book, Fukuyama is that liberalism needs to find a way to embrace patriotism, argues Yale University’s Steven B. Smith, author of Reclaiming Patriotism in an Age of Extremes. Liberals need to endorse a robust national narrative, he writes for the Witherspoon Institute’s Public Discourse. 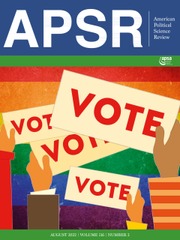 The threat to democracy isn’t (for now) a usurper system, but democratic ideology itself, according to a significant new study on democratic attitudes published in the American Political Science Review, adds The Post’s Jason Willick.

Talk of the “defense of democracy” evokes a conveniently sharp division between citizens who favor democracy and those who don’t. Suthan Krishnarajan takes a more subtle approach. He shows that citizens who self-consciously support democracy can simultaneously support undemocratic actions on a large scale when it suits their political interests — and not recognize the contradiction. RTWT