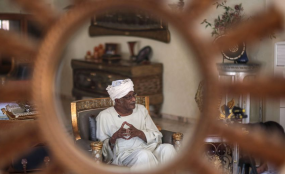 Sudanese activists are mourning the loss of Dr Amin Maki Madani (left), a prominent advocate for democracy, human rights, and the rule of law, who died earlier this week. His death seemed especially poignant, following hard upon the passing of Ambassador Princeton Lyman, a former Special Envoy to Sudan and long-time member of the National Endowment for Democracy (NED) Board of Directors.

Madani was President of the Sudanese Civil Society Initiative since its establishment in December 2014, and a board member of the Sudan Democracy First Group.

The civil society leader was kept in detention by the Sudanese authorities for months in 2015 after joining the Sudan Appeal, a political communiqué calling for regime-change, All-Africa reports. He was released together with two other prominent opposition figures, Faroug Abu Eisa (Sudan Democracy First Group) and Farah El Agar. Opposition and civil society groups criticized the long detentions of the men they considered “symbols of the Sudanese opposition”.

“Dr Amin was one of Sudan’s greatest heroes through his tremendous struggles in his public work, where he was faithful to his nation’s people; his legal profession and professional conscience,” the Sudan Democracy First Group observed. “In defending the rights and liberties of the Sudanese people, Dr Amin was subjected to many acts of oppression, detention, persecution and harassment. He was incarcerated at a young and old man and in good and bad health, but he never bargained for what he believed.” 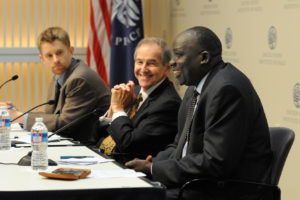 “Everyone at NED feels privileged to have been able to know and work with Princeton during his nine years of service on the board,” said NED President Carl Gershman.  “He was an incomparably informed and devoted board specialist on Africa. More than that, he was a mentor to the young people on the NED staff, a gifted teacher, and an inspiring motivator.  He didn’t just support NED’s work. He helped shape lives. In so doing, he enriched the NED’s institutional life and moral culture, and for that, we will be forever grateful to Princeton. May his memory be a blessing.”

Lyman was a “true giant of U.S.-Africa relations, he had a long and extraordinary career as a diplomat and scholar, serving as the United States’ ambassador in Nigeria and South Africa, as an assistant secretary of state, and as the U.S. special envoy to Sudan, among other posts,” notes Council on Foreign Relations analyst Michelle D. Gavin.

“In all of these positions, he was never a passive caretaker. Princeton Lyman had great clarity of purpose, and he got things done,” she adds. “From helping to shepherd South Africa’s transition to democracy to working on the implementation of the Comprehensive Peace Agreement between Sudan and South Sudan, he took on hard problems creatively and pragmatically, and served a far-sighted view of American interests in a more peaceful and more just world.”

NED Board colleagues pay tribute to Princeton Lyman (below).