In its latest report, Nations in Transit 2020: Dropping the Democratic Facade, Freedom House warns of a “stunning democratic breakdown” across Central Europe, the Balkans, and Eurasia as many leaders in the region attempt to do away with any remaining checks on their power, VOA reports:

The report says the attacks on democratic institutions could be accelerated by the ongoing coronavirus pandemic, but Freedom House President Michael Abramowitz said the health crisis also creates an “inflection point” after which things could become much worse, or democracy could be revitalized. 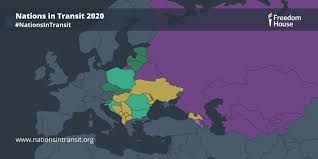 “A growing number of leaders in Central and Eastern Europe have dropped even the pretense that they play by the rules of democracy. They openly attack democratic institutions and are working to restrict individual freedoms,” the group – a partner of the National Endowment for Democracy (NED) – says in its annual Nations In Transit report, released on May 6. 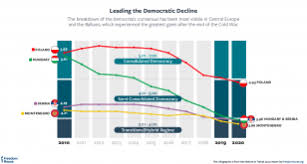 “It is essential for democratic countries to stand up to bullies, but that’s only possible if leading politicians promote democratic principles through their words and actions,” said Zselyke Csaky, research director for Europe and Eurasia. “So far this has been lacking, resulting in shortsighted and desultory responses. To tackle the crisis and to arrest the democratic decline, we will need cooperation, transparency, and accountability. If democracy is to survive in the world, it must be reinvigorated from the inside, by the democratic community itself.”