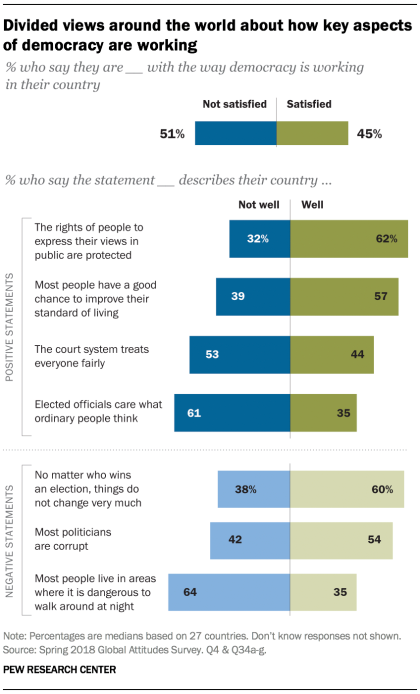 Popular discontent about the economy, individual rights and out-of-touch elites is driving dissatisfaction with democracy and fueling populism. Citizens view politicians as unsympathetic to ordinary people and unable to effect change when in office, according to a new Pew Research Center analysis.

Views about the performance of democratic systems are decidedly negative in many nations. Across 27 countries polled, a median of 51% are dissatisfied with how democracy is working in their country; just 45% are satisfied. Assessments of how well democracy is working vary considerably across nations. In Europe, for example, more than six-in-ten Swedes and Dutch are satisfied with the current state of democracy, while large majorities in Italy, Spain and Greece are dissatisfied, Pew’s RICHARD WIKE, LAURA SILVER and ALEXANDRA CASTILLO observe:

To better understand the discontent many feel with democracy, we asked people in the 27 nations studied about a variety of economic, political, social and security issues. The results highlight some key areas of public frustration: Most believe elections bring little change, that politicians are corrupt and out of touch and that courts do not treat people fairly. On the other hand, people are more positive about how well their countries protect free expression, provide economic opportunity and ensure public safety.

Anger at political elites, economic dissatisfaction and anxiety about rapid social changes have fueled political upheaval in regions around the world in recent years. Anti-establishment leaders, parties and movements have emerged on both the right and left of the political spectrum, in some cases challenging fundamental norms and institutions of liberal democracy. Organizations from Freedom House to the Economist Intelligence Unit to V-Dem have documented global declines in the health of democracy.

“[I]deas at the core of liberal democracy remain popular among global publics, but commitment to democracy is weak… [and] …views about the performance of democratic systems are decidedly negative in many nations.” RTWT

People who are dissatisfied with democracy in their country are less likely to feel that economic conditions in their country are good, that the financial situation of average people has improved over the past 20 years, and that key democratic norms are being respected, note Pew researchers  ALEXANDRA CASTILLO, CHRISTINE HUANG and LAURA SILVER: 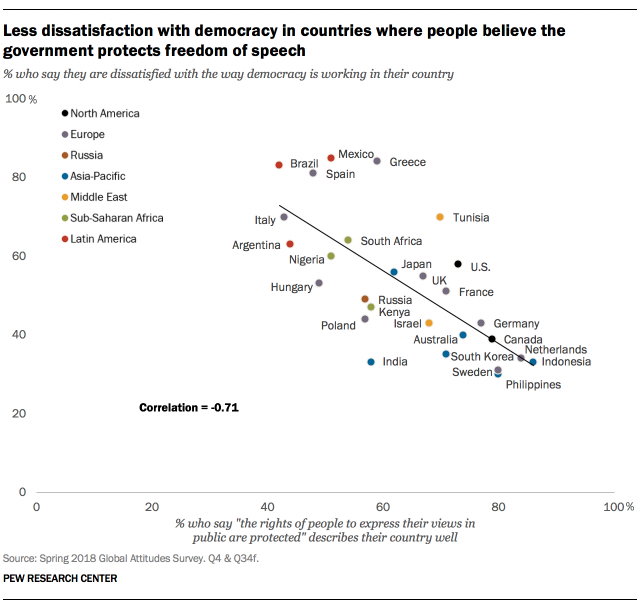