A top court in Ecuador on Tuesday convicted Rafael Correa, the country’s former president, on corruption charges and sentenced him to eight years in prison, a blow to a charismatic yet divisive leader and his hopes to lead the nation again, the New York Times reports:

Mr. Correa, a socialist, was Ecuador’s president from 2007 to 2017, a time when left-wing leaders were ascendant in Latin America, including Venezuela’s Hugo Chávez, Bolivia’s Evo Morales and Brazil’s Luiz Inácio Lula da Silva. That left-wing wave has since subsided….The case emerged from an investigation initially known as Arroz Verde, or Green Rice, after the name of the file found in an email sent to a former aide to Mr. Correa. The file, revealed by the online publication Mil Hojas {a grantee of the National Endowment for Democracy}, contained names, amounts and dates of payments made by several companies and individuals to the campaigns of his party, prosecutors said. 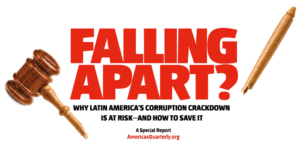 He was found guilty of accepting funds from private businesses for his 2013 election campaign in return for state contracts, AFP adds:

Attorney General Diana Salazar says various businesses paid $7 million in bribes to secure those contracts. Correa, a leftist economist by training, was implicated over a $6,000 payment to his private account, which he claims was a loan. Amongst the others sentenced on Tuesday was former vice president Jorge Glas, who since 2017 has been serving a six-year prison sentence in a separate case for accepting a bribe from Brazilian construction giant Odebrecht.

Those convicted were also banned from any political role for 25 years, the BBC adds.