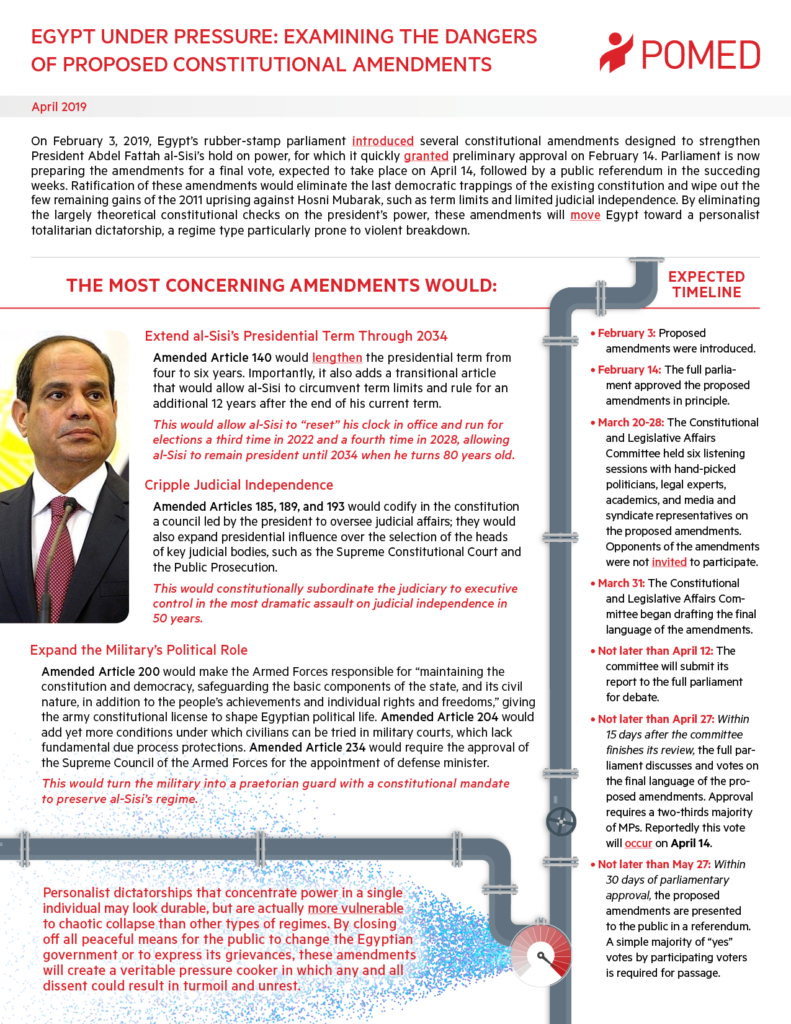 Al-Sisi is likely seeking endorsement of troubling constitutional amendments that would tighten his grip on power, expand the role of the military in Egypt’s political system, and move Egypt toward a personalist dictatorship under his control.  POMED’s latest fact sheet, “Egypt Under Pressure: Examining the Dangers of Proposed Constitutional Amendments,” summarizes these proposed constitutional changes and highlights their dangers for Egypt’s stability.

After taking power in a 2013 coup that ousted the country’s first elected president, the Islamist Mohamed Morsi, Mr. el-Sisi, a former army chief, promised his people that he would build democracy and leave office in 2022 after completing a second term, The NY Times adds:

Instead, he has built a reputation for brutality and repression, torturing and killing hundreds of Egyptians and jailing perhaps as many as 60,000 others, including students and American citizens….. No members of the political opposition have been allowed to participate in the government’s national dialogue sessions on the changes. Several people who posted videos on Facebook criticizing the amendments have been arrested. Two Egyptian actors who criticized Mr. el-Sisi on a panel with a congressman in Washington last week were subsequently expelled from their union, which accused them of treason.

Nearly all of the current wave of Egypt’s political exiles suffered from the deep social and political polarization, Carnegie analysts Michele Dunne [a National Endowment for Democracy board member] and Amr Hamzawy observe. Even once-cohesive networks, such as the Muslim Brotherhood, were subject to new divisions in exile as members argued about why the post-Mubarak transition failed so abysmally and what should be done now, they write:

Secular activists and human rights defenders have continued to eye the Brotherhood with mistrust, especially as the movement has failed to offer a critical account of its role in the failed democratic transition from 2011 to 2013. Meanwhile, members and supporters of the Brotherhood have not forgotten the role of secular groups, liberal and leftist alike, in supporting the army takeover of politics in the summer of 2013 and in some cases justifying the bloody repression that followed.

“These circumstances have kept Egyptians abroad divided into small social and ideological networks within which they felt reasonably safe, preventing the emergence of broadly shared exile efforts,” they add.