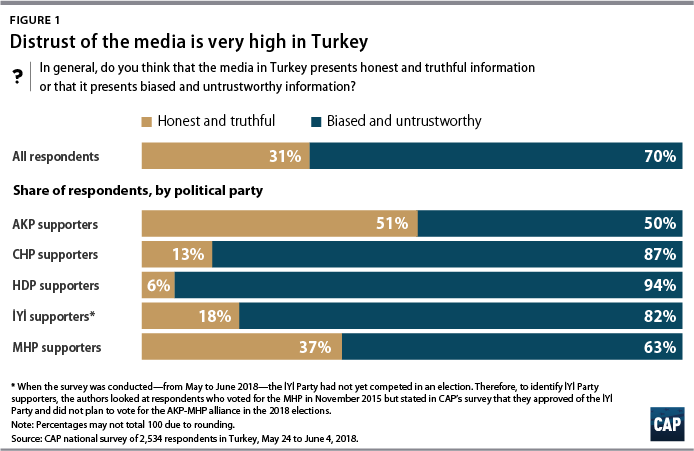 A dominant narrative that has come out of Turkey in recent years highlights how President Recep Tayyip Erdoğan has consolidated control over the news media, according to analysts Andrew O’Donohue, Max Hoffman, and Alan Makovsky. Numerous human rights reports document how the Turkish government has sought to muzzle the press, whether by imprisoning journalists, eliminating news outlets, or overseeing the purchase of media brands by pro-government conglomerates. As the watchdog organization Reporters Without Borders writes, the regime has been “tightening the vice on what little is left of pluralism,” and Turkey is now “the world’s biggest jailer of professional journalists,” they write for the Center for American Progress:

Despite this heavy censorship, two key trends have undercut President Erdoğan’s efforts to control the media landscape: rising distrust toward the media and increasing fragmentation in the ways that Turks get their news. The coronavirus outbreak in Turkey clearly illustrates these dynamics. Many Turks, doubting the integrity of traditional media, have viewed rosy coverage of Turkey’s response to the pandemic with skepticism and turned instead to social media, where, for example, a video claiming that the government was underreporting infections went viral.

Grant programs should train journalists to use content verification technologies so that they can serve as the first line of defense, they add. From 2016 to 2019, the National Endowment for Democracy increased its level of funding in support of independent journalism in Turkey sixfold; this increased level of funding should be maintained. RTWT