The US is the sole democratic superpower, writes FT analyst Martin Wolf. Its ongoing political transformation has deep implications for liberal democracies everywhere, as well as for the world’s ability to co-operate on vital tasks, such as managing climate risks.

Yet the sad reality of the fragile state of democracy in the United States—particularly in the wake of the January 6 insurrection—has undercut Washington’s ability to promote democratic values abroad, says a leading commentator.

President Joe Biden sees the fight of our time as one between democracy and autocracy, pledging to convene a Summit for Democracy to reestablish U.S. leadership in the democratic cause, notes Richard Haass, President of the Council on Foreign Relations and the author of The World: A Brief Introduction.

He has declared that the United States is in “a contest with autocrats,” announced plans to hold his Summit for Democracy, and pledged to prioritize relations with countries that share American values. Yet such commitments, however sincere, have hardly made human rights and democracy promotion a more prominent part of U.S. foreign policy, he writes for Foreign Affairs:

U.S. presidents have always allowed professed commitments to human rights and democracy to be set aside when other interests or priorities have come to the fore. The “free world” of the Cold War was often anything but free. But the broader shift in U.S. foreign policy today, with its stress on both great-power competition and short-term domestic priorities, has made those tradeoffs more frequent and acute.

Two separate threads in the “Biden doctrine” – an idealist vision for global democracy and a more pragmatic, restrained approach – have yet to be resolved, a War On The Rocks survey of experts suggests. 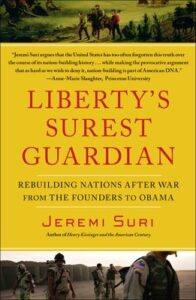 There are enduring academic debates about whether democracy is really essential to domestic stability and global peace, but the effort to build functioning, legitimate states in troubled societies has been part of U.S. foreign policy since America has been a global power, adds Hal Brands, the Henry Kissinger Distinguished Professor at Johns Hopkins SAIS. The tradition draws on two long-running threads in the intellectual fabric of U.S. strategy, he writes for Bloomberg:

The United States must work with others, through both formal and informal means, to set international norms and standards and marshal collective action, Haass adds. Such an approach will require the involvement of traditional allies in Europe and Asia, new partners, countries that may need U.S. or international help at home, and nondemocracies, he insists.