Democracy advocates are mourning the loss of veteran journalist and analyst Gautam Adhikari, who died in Washington, D.C., this week, the Times of India reports.

The former Times of India Executive Editor held several academic and public policy fellowships, including serving as a resident fellow and adjunct lecturer in public policy at Harvard University’s Shorenstein Center on Media, Politics and Public Policy, a J.B. and Maurice C. Shapiro fellow at George Washington University, a Senior Fellow in National Security and International Policy at the Center for American Progress, a project director of the World Movement for Democracy and a senior resident fellow at the International Forum for Democratic Studies at the National Endowment for Democracy.

Adhikari was the lead organizer of the World Movement’s founding assembly, which took place in New Delhi from February 14-17, 1999, and was responsible for recruiting Amartya Sen to deliver the keynote address  – a seminal statement on “Democracy as a Universal Value,” later published in the Journal of Democracy (July 1999). He later directed the Asian Center for Democratic Development, an initiative welcomed by the NED’s Carl Gershman. 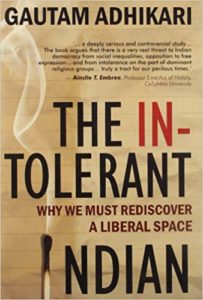 “India has no option but to be a democracy” because of its diversity, said Adhikari. “It’s so disparate and .. it is a country that has grown out of a democracy movement – the nationalist movement – and the traditions have gone deep into the Indian population,” he told PBS’s Ben Wattenberg.  Modern India survives not despite being a democracy, but by staying true to its secular, pluralist identity, he told the Asia Society (above).

But Adhikari feared that extremist ideologies could obliterate the concept of liberal democracy, a concern he expressed in The Intolerant Indian: Why We Must Rediscover a Liberal Space.

“Liberal democracy was never a consciously mass-internalized concept in any society, but its worldwide acceptance today as the best of imperfect options for managing society seems to be at a disconcerting low,” he told Foreign Affairs.

“As more political battles emerge centered on identity, rather than ideas or ideology, this nativist wave threatens the liberal world order built in the decades after World War II as respect decreases for basic freedoms around the world,” he wrote for the Wall Street Journal, in an op-ed co-written with CAP’s Brian Katulis.

“Some of this can be addressed through a realignment of centrist political forces committed to liberal values, as well as a commitment to elevating democracy in foreign policy agendas,” they wrote. “Events of the 20th century show that hyper-nationalist tendencies are best tackled at an early stage if calamities are to be avoided.”

Adhikari’s other books include India: The First 50 Years; and Conflict and Civilisation.