Thousands of opposition supporters took to the streets of Georgia’s capital Tbilisi on Sunday to demand snap polls after the ruling Georgian Dream party claimed victory in a parliamentary vote, AFP reports:

The ex-Soviet nation’s opposition rejected the results of Saturday’s vote, which showed Georgian Dream with a narrow lead in the tightly contested election. The demand for fresh elections could spark another political crisis in the Caucasus republic of four million, where elections are often followed by accusations of fraud and mass demonstrations.

Tbilisi-based analyst Gela Vasadze said Georgia appeared headed for a period of political uncertainty, even if the opposition fails to bring out big crowds of protesters.

“The coronavirus pandemic will of course scare off many from taking to the streets,” Vasadze told AFP. “In any case, Georgian Dream will have an extremely shaky majority in the new parliament,” he said, raising the possibility of another snap vote “in the nearest future”.

Preliminary results show the ruling Georgian Dream, or GD, led by billionaire Bidzina Ivanishvili, garnered about 48% of the vote, according to election officials, VOA adds. The opposition United National Movement, or UNM, of former President Mikheil Saakashvili, was second with 27%. Trailing with roughly 4% was European Georgia, a party that split from the UNM in 2017. Altogether, there are eight opposition parties, including pro-Russia Patriot’s Alliance, which is perceived as an ally to the Georgian Dream.

Alleged irregularities in results protocols, widespread reports of potentially intimidating behavior in or around polling stations, delays in the publication of results and persistent perceptions of pre-election abuses of power detracted from notable improvements in the legal framework and administrative procedures for the elections, according to an analysis issued by the National Democratic Institute. 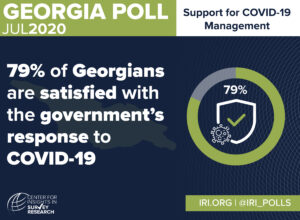 “The citizens of Georgia are to be congratulated for turning out to vote, despite the challenges of a global pandemic,” said Christine Todd Whitman, former governor of New Jersey and administrator of the Environmental Protection Agency in the U.S., who served as a member of the NDI analysis team. “As the results of the first round are finalized and the country heads to run-off elections on November 21, government leaders and election authorities will need to take extraordinary steps to address the concerns that have been raised and ensure public confidence in the overall process and final results,” she added.

The NDI analysis is based on virtual interviews with key stakeholders conducted October 22 – 31; input from remote long-term analysts; the Institute’s expertise and relationships developed over 25 years of programming in Georgia; and the findings of credible nonpartisan citizen monitors who were deployed throughout the country on October 31. It builds on NDI Georgia Election Watch reports issued on August 19, October 9 and October 20, 2020, and makes 35 recommendations to improve Georgia’s electoral process, including the following:

The analysis was supported by the United States Agency for International Development (USAID) and the National Endowment for Democracy (NED).

Election monitors from the Organisation for Security and Cooperation in Europe (OSCE) and the NATO Parliamentary Assembly said in a joint statement that the elections “were competitive and, overall, fundamental freedoms were respected.” But, they added, the elections were “far from flawless” and marred by “pervasive allegations of pressure on voters… and blurring of the line between the ruling party and the State.”

The vote was expected to determine “whether we keep the existing semi-autocratic dominant-power politics, or switch to a more pluralistic and open system that may [or may not] lead us to a full democracy,” said Ghia Nodia, a former Reagan-Fascell Fellow at the National Endowment for Democracy, who delivered the 13th Annual Seymour Martin Lipset Lecture on “The Crisis of Postnationalism.”