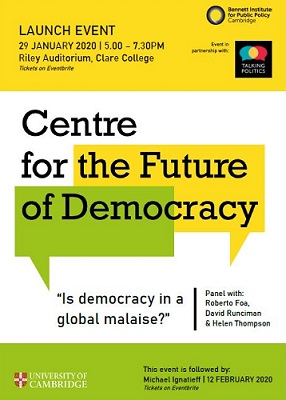 Dissatisfaction with democracy within developed countries is at its highest level in almost 25 years, according to University of Cambridge researchers. The study draws on the biggest global dataset on attitudes towards democracy, based on four million people in 3,500 surveys, The BBC reports:

The study, from the University of Cambridge’s Centre for the Future of Democracy, has tracked views on democracy since 1995 – with the figures for 2019 showing the proportion dissatisfied rising from 48% to 58%, the highest recorded level… The research, covering 154 countries around the world, is based on asking people if they are satisfied or dissatisfied with democracy in their own country.

“Across the globe, democracy is in a state of malaise,” report author Roberto Foa said. “We find that dissatisfaction with democracy has risen over time and is reaching an all-time global high, in particular in developed countries.” 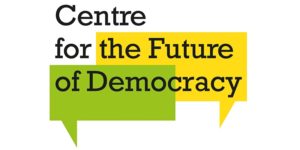 Shifts in democratic satisfaction often responded to “objective circumstances and events” such as economic shocks or corruption scandals. “The 2015 refugee crisis and the 2008 financial crisis had an immediately observable effect upon average levels of civic dissatisfaction,” said Foa.

Key Findings:
Across the globe, democracy is in a state of malaise. In the mid-1990s, a majority of
citizens in countries for which we have time-series data – in North America, Latin America,
Europe, Africa, the Middle East, Asia and Australasia – were satisfied with the performance of
their democracies. Since then, the share of individuals who are “dissatisfied” with democracy
has risen by around +10% points, from 47.9 to 57.5%.
This is the highest level of global dissatisfaction since the start of the series in 1995.
After a large increase in civic dissatisfaction in the prior decade, 2019 represents the highest
level of democratic discontent on record.
The rise in democratic dissatisfaction has been especially sharp since 2005. The year
that marks the beginning of the so-called “global democratic recession” is also the high
point for global satisfaction with democracy, with just 38.7% of citizens dissatisfied in that
year. Since then, the proportion of “dissatisfied” citizens has risen by almost one-fifth of the
population (+18.8%).
Many of the world’s most populous democracies – including the United States, Brazil,
Nigeria, and Mexico – have led the downward trend. In the United States, levels of dissatisfaction with democracy have risen by over a third of the population in one generation.
As a result, many large democracies are at their highest-ever recorded level for democratic dissatisfaction….
However, the picture is not entirely negative. Many small, high-income democracies have moved in the direction of greater civic confidence in their institutions. In Switzerland, Denmark, Norway, the Netherlands and Luxembourg, for example, democratic satisfaction is reaching all-time highs. …
Comparison by region shows a number of other bright spots, above all in Asia. In
democracies in South Asia, Northeast Asia, and above all in Southeast Asia, levels of civic
contentment are significantly higher than in other regions, the report adds. RTWT 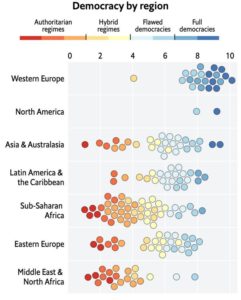 “Such levels of democratic dissatisfaction would not be unusual elsewhere,” said Foa. “But for the United States it may mark an end of exceptionalism, and a profound shift in America’s view of itself.”

The Cambridge study follows a report published by the Economist Intelligence Unit (left) last week, which found that the U.S. had a “flawed democracy” and the strength of global democracy was at its lowest since 2006, CNBC adds. Meanwhile, research from Edelman last week found that 70% of people around the world believed democracy was “losing its effectiveness as a form of government.”

David Runciman talks to the writer, academic, politician and current head of the Central European University Michael Ignatieff about his life in politics and his hopes and fears for the future of democracy. 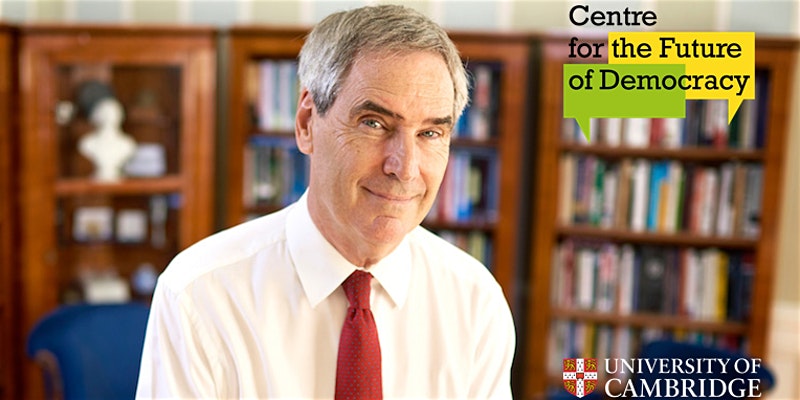