The past twelve months registered the 14th consecutive year of decline in global freedom, according to Freedom in the World 2020, the latest survey of political rights and civil liberties in 210 states from Freedom House:

The gap between setbacks and gains widened compared with 2018, as individuals in 64 countries experienced deterioration in their political rights and civil liberties while those in just 37 experienced improvements. The negative pattern affected all regime types, but the impact was most visible near the top and the bottom of the scale. More than half of the countries that were rated Free or Not Free in 2009 have suffered a net decline in the past decade.

Leading democracies are not only failing to confront the authoritarian resurgence, the largest and arguably most influential democracies’ “drift from liberal democratic ideals is sending exactly the wrong message,” said Mike Abramowitz, president of Freedom House.  “If major democratic powers fail to set strong examples and provide constructive leadership, it will be impossible to reverse the global trends that threaten freedom for all societies.”

Bright spots in an otherwise dismal outlook for freedom can be found in the pro-democracy protests in Hong Kong, Bolivia, Chile, Sudan, Russia, Algeria, India and Iran, he added. But the global struggle for democracy is lacking leadership.

As VOA’s Arash Arabasadi reports (above), the group says individual freedoms and democratic systems are under attack. The report focuses on developments between January and December 2019. 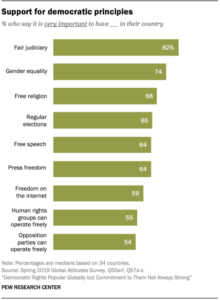 While autocrats are toiling to stamp out the last vestiges of domestic dissent and spread their harmful influence across the world, many freely elected leaders are dramatically narrowing their concerns to a blinkered interpretation of the national interest, adds Sarah Repucci, vice president for research and analysis at Freedom House, a partner of the National Endowment for Democracy (NED). In fact, such leaders are increasingly willing to break down institutional safeguards and disregard the rights of critics and minorities as they pursue their populist agendas, she observes:

The unchecked brutality of autocratic regimes and the ethical decay of democratic powers are combining to make the world increasingly hostile to fresh demands for better governance. A striking number of new citizen protest movements have emerged over the past year, reflecting the inexhaustible and universal desire for fundamental rights. However, these movements have in many cases confronted deeply entrenched interests that are able to endure considerable pressure and are willing to use deadly force to maintain power. The protests of 2019 have so far failed to halt the overall slide in global freedom, and without greater support and solidarity from established democracies, they are more likely to succumb to authoritarian reprisals.

The Freedom House report follows another global survey on the state of global democracy from the Pew Research Center (above). “Democracy remains a popular idea among average citizens,” that 34-nation survey found, “but commitment to democratic ideals is not always strong.” 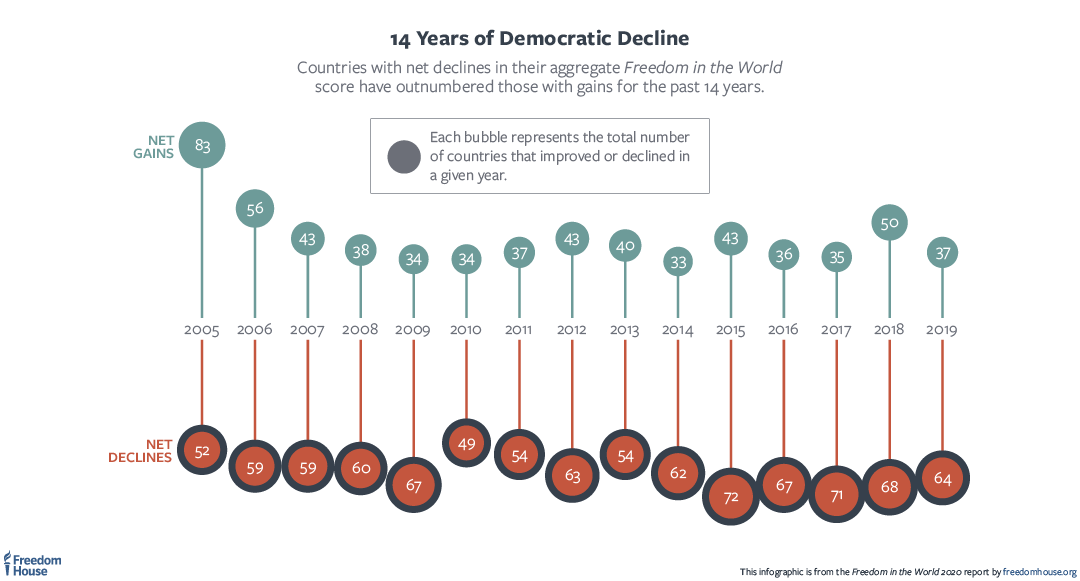