Iraq’s politics, governance, and economy all pose major challenges that could leave Iraq unstable or even divide it, notes CSIS analyst Anthony H. Cordesman. Iraq’s progress towards democracy has so far produced two divisive and near paralyzing elections and it remains deeply divided between Sunni and Shi’ite and Arab and Kurd – as well as within each group- and along regional and tribal lines, he contends in “The Strategy the U.S. Should Pursue in Iraq”:

The World Bank rates Iraq’s levels of governance as some of the lowest in the world. Corruption has been a critical problem since at least 2003, and Transparency International rates Iraq as the 12th most corrupt nation in the world. Iraq desperately needs to improve its ability to plan, reform, and manage recovery, rebuilding, and growth…..

The U.S. cannot afford to leave a power vacuum in Iraq. It must deal with Iraq’s remaining security problems and military weaknesses, and deal with its grave political divisions, problems in governance, and years without effective economic growth and development. At the same time, the U.S. needs to recognize that it faces very real rivals for influence in Iraq, and a nation that has a long and strong history of nationalism and sensitivity to foreign pressure – despite its deep sectarian and ethnic divisions. 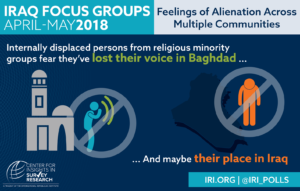 Iraqi civil society groups – including partners of the National Endowment for Democracy – are bringing faith communities together, says the Institute for War and Peace Reporting.

IWPR-trained activists have launched a successful series of initiatives to promote reconciliation between Iraq’s different faith communities, it notes, citing grassroots efforts to promote solidarity between members of different religions.

Research from the International Republican Institute (above) confirms the disconnect between citizens and government.

Iraq’s Kurdish-language renaissance has in turn stimulated a renewal of Kurdish self-awareness in transnational social media and diaspora communities, says analyst Henri J. Barkey. The Kurdish diaspora is especially strong in Europe, to which over one million Kurds have immigrated over the past six decades—initially as guest workers and then as refugees fleeing repression, he writes for Foreign Affairs:

Free to organize and collaborate with other civil society groups, Europe’s Kurds have raised public awareness of Kurdish issues and put pressure on national governments in Germany, France, and the Netherlands—as well as on the EU as a whole—to change their policies toward Iran, Iraq, Syria, and Turkey. In this, they have been aided by the rise of Kurdish-language social media.

U.S. aid should be conditional on the honest Iraqi use of aid resources, real progress, and real movements towards unity that deal with ethnic and sectarian issues by creating bridges rather than choosing sides, CSIS’s Cordesman adds:

The U.S. should not ignore the need for change, reform, and dealing with corruption. At the same time, dealing with Iraq’s fractured politics, ethnic and sectarian tensions, corruption, and many areas of failed governance, will mean dealing patiently and quietly in ways that actually help Iraq.