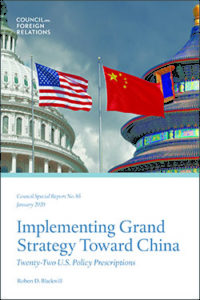 If it is not to lose its strategic struggle with China in Asia and globally, the United States needs to present an alternative model to Beijing’s authoritarian archetype, says a new report. That requires an integrated grand strategy that competes with the PRC across many integrated domains—diplomacy, the global economy, defense, digital technology/artificial intelligence (AI), the cyber sphere, public information, and ideology, writes Robert D. Blackwill, Henry A. Kissinger Senior Fellow for U.S. Foreign Policy at the Council on Foreign Relations.

“China wants to replace the United States as the strongest and most influential power in Asia and beyond,” he warns. “Washington should launch an all-out effort to limit the dangers that Beijing’s economic, diplomatic, technological, and military expansion pose to U.S. interests in Asia and globally,” Blackwill writes in Implementing Grand Strategy Toward China: Twenty-Two U.S. Policy Prescriptions.

The United States should marshal its diplomacy with nations within the region, as well as those outside it (e.g., European countries that favor rules-based approaches—although this will require awakening Europe from its strategic stupor), in order to strengthen international organizations to make progress on climate, free trade, international security, and freedom of navigation. This coalition of the democratic willing, this “global commonwealth,” as President George H.W. Bush called it, should be launched at the heads-of-government
level in Washington, Blackwill adds: 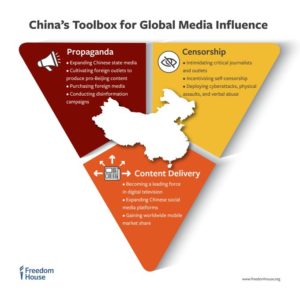 The United States should also protect the integrity of its democratic institutions, both for the good of the nation and to offer a powerful alternative model to China’s authoritarian archetype. China’s meteoric rise, coupled with its present economic and military strength, makes the “China model” a beguiling path for some developing countries. While the United States is right to invest increased time and money to actively challenge China, liberal democratic values will be less attractive overseas if the United States cannot successfully manage its own affairs. RTWT

China is trying to shape the global narrative about its actions at home and abroad, Freedom House said in a report published Wednesday, writes Anna Fifield, The Washington Post’s Beijing bureau chief.

Not content with pervasive censorship and state control of almost all media at home, the ruling Communist Party under strongman President Xi Jinping has dramatically stepped up its efforts to disseminate its version of events….Freedom House is among the American human rights organizations penalized by China in retaliation for the United States’ support for protesters in Hong Kong. Others include the National Endowment for Democracy and Human Rights Watch.

“China is trying to promote itself as an international model,” said Sarah Cook, senior research analyst for China at Freedom House and the author of the report, “Beijing’s Global Megaphone.”