“I have chosen to live a life of truth,” Lee Cheuk-yan (above), chairperson of the group behind Hong Kong’s annual Tiananmen vigil, said in an unapologetic mitigation statement before being jailed earlier this year for organizing an unauthorized demonstration in 2019. Vice Chairperson Chow Hang Tung was no less defiant last week. “I for one, refuse to play along and submit to my so-called guilt,” the barrister said prior to sentencing for her role in last year’s gathering for victims of the 1989 Beijing crackdown, Bloomberg’s Matthew Brooker writes:

Intentionally or otherwise, both were channeling the spirit of Vaclav Havel, the onetime Czech dissident who later became president. 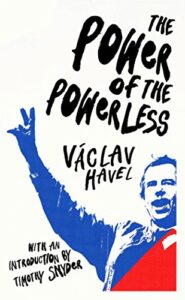 Havel, who died 10 years ago this month, has become a touchstone to a generation of democracy supporters in Hong Kong, just as he was to dissidents across Eastern Europe in their darkest years before the collapse of communism. His seminal 1978 essay, “The Power of the Powerless,” is among the books most sought after by the hundreds of activists now in prison, the Economist reported last month.

“Living under communism you have to lie,” Lee, a trade union leader who helped found the alliance and carried aid to the pro-democracy student protesters in Beijing in 1989, told Brooker in an interview at the start of this year, before his incarceration. “And that will break down one day. That’s the only hope we can have, like what happened in Eastern Europe. That’s why Havel says that living in truth is so important, that you don’t participate in that facade.” RTWT

The low turnout in Sunday’s election in Hong Kong was “hugely embarrassing” for the government, say analysts. The poll was “not a typical free and fair election [but] a selection process, thanks to an electoral overhaul with no meaningful participation from the opposition (not least because many are in jail),” pro-democracy activist and former legislator Nathan Law Kwun Chung wrote for The Times.

In conversation with Uyghur, Tibetan, and Chinese democracy activists at the National Endowment for Democracy (NED – see below), Law discussed his recent book and the importance of supporting democracy activists to work in solidarity against authoritarianism.