Pro-democracy activists have called for mass protests against what they see as erosion of Hong Kong’s autonomy entailed in a proposed national security law to ban “treason, secession, sedition and subversion,” the BBC reports:

Anger was already apparent on Friday, as a group of protesters descended on China’s Liaison Office in Hong Kong. The draft law was submitted at the annual National People’s Congress (NPC), which largely rubber-stamps decisions already taken by the Communist leadership, but is still the most important political event of the year.

A challenge to the world’s values 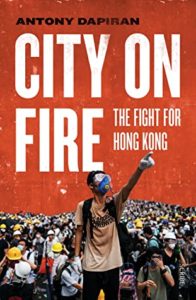 Wilson Leung, a founding member of Hong Kong’s Progressive Lawyers Group, a pro-democracy association, said the national security laws could allow the authorities to criminalize the opposition for even trying to organize. Vivian Wang and Austin Ramzy write for The Times:

“They are challenging the world: ‘Are you going to do something for Hong Kong?’” Mr. Lee said at a news conference. “This is a challenge of the world’s values.”

“It is going to be very demoralizing. You sort of wonder what becomes their raison d’être,” said Antony Dapiran, a lawyer and author of “City on Fire: The Fight for Hong Kong,” a book about the protests. “The big thing they were acting as the watchdog to prevent has sort of already happened. What’s left for them to do?”

Australian Sky News host Graham Richardson is worried that Hong Kong’s political system will be “just gulped up by the Chinese government“. He told Sky News host Andrew Bolt China is taking over “much faster than we ever thought it would”. “No one ever believed the agreement with Britain would ever hold, the question was, how long would it be before the Chinese moved”.

The Chinese Communist Party is using Covid-19 as a pretext to throttle Hong Kong’s pro-democracy movement, analyst Marc Thiessen writes for The Post.

But Hong Kong’s pro-democracy forces will not be intimidated, says Joshua Wong, secretary general of the pro-democracy party Demosisto. “This summer, I believe we will get the people on the street, more than a million people show our anger and solidarity, and to keep on the fight.”