Despite Venezuela’s economic collapse and dictator Nicolás Maduro’s plummeting popularity, opposition leaders had not been able to present a united front in a long time. Now, they are all backing Juan Guaidó. They see the 35-year-old engineer as a sincere, well-intentioned caretaker president who only wants to preside over a quick transition to democracy, The Miami Herald’s Andres Oppenheimer reports:

Guaidó told me in the Jan. 21 interview that his two main priorities once sworn in as Venezuela’s legitimate leader would be getting urgent humanitarian help from friendly countries to alleviate Venezuela’s food and medicine shortages and calling early elections.

“An election must be called as soon as possible,” he said, noting that he would have to create the right conditions first. “Our constitution says it should be within 30 days. We must make sure that all votes are counted, and everybody has the right to vote and to be elected.”

Guaidó has won significant international support after declaring himself the country’s interim president in a dramatic escalation of efforts to force out Nicolás Maduro, who has overseen the country’s slide into authoritarianism and economic ruin, the Guardian (above) reports.

Venezuela’s exiled high court is guiding a democratic transition in Venezuela, using a constitution amended to consolidate the Chavista revolution. It makes for a precious irony, adds Bloomberg’s Eli Lake. “Maduro’s ouster from office will be the result of processes spelled out in the constitution promulgated by his predecessor,” says Thor Halvorssen, the Venezuelan-born president of the New York-based Human Rights Foundation.

There are three steps the international community should take to facilitate a transition, Lilian Tintori  [who received the National Endowment for Democracy‘s 2015 Democracy Award – below, right] writes for the Washington Post: 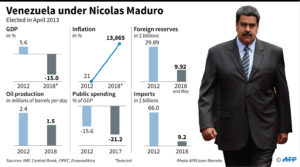 After several months of precarious equilibrium, the political environment is changing in Venezuela. From a constitutional law perspective, Venezuela is in a transitional process based on Article 333 of Venezuela’s Constitution, argues José Ignacio Hernández, currently a visiting fellow at Harvard University’s Center for International Development. A transitional government, together with the National Assembly, will be able to adopt the public policies oriented to recover the capability of the Venezuelan state (currently undermined by kleptocracy and organized crime), address the complex humanitarian emergency, the massive crisis of refugee and migrants, and promote the institutional reforms necessary to call free and
transparent elections, he writes in a CSIS analysis.

The U.S. and its allies should ramp up international pressure on money launderers and shell companies that shelter dirty Venezuelan money, says Brookings analysts Dany Bahar, Ted Piccone and Harold Trinkunas. They should also work together to restrict Maduro’s ability to benefit from Venezuela’s businesses, but this should be coordinated with a broader political strategy designed to end the stalemate, they write for The Hill: 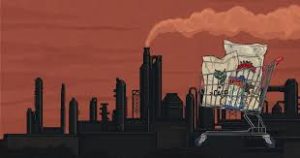 Building an off-ramp for the Maduro regime will be difficult. But a combination of rising costs on Maduro’s inner circle through targeted sanctions and prosecutions, reassurance to the military’s rank and file that they will benefit from a transition to democracy and positive incentives of economic assistance by entities willing to negotiate with the new interim government (such as the International Monetary Fund and the Inter-American Development Bank) will make legitimate democratic change, in accordance with Venezuela’s constitution, more likely.

Given Venezuela’s tailspin, the likelihood of Maduro making an orderly departure is low. His exit, instead, is more likely to be violent and chaotic, as he has no desire to abandon power and his key domestic and foreign allies wish to delay the inevitable for as long as possible, according to a STRATFOR analysis for RealClearWorld:

Even if the opposition and government agree to formal offers to negotiate, the former will want to sit down for such talks with as strong a hand as possible. It’s also a case of once bitten, twice shy: Maduro has previously roped his opponents into fruitless negotiations, so his opponents will be wary of any entering any new negotiations. For such talks to succeed, or even advance beyond the initial stages, they would require strong backing from key military officials or from the defense minister himself. Without their support, the situation in Venezuela will slide toward open insurrection, raising the prospect of more violence as Maduro’s opponents square off against security forces intent on maintaining his rule.

The brief appearance in Venezuela in mid-December of two Russian strategic bombers along with supply transport planes was provocative, notes Georges A. Fauriol, a Senior Associate at the Center for Strategic & International Studies (CSIS).  While of no immediate military value, it highlighted the degree to which Moscow is not hesitating to demonstrate its willingness to challenge Washington, he writes for Global Americans, a partner of the National Endowment for Democracy:

For its part, China has been flexing its diplomatic and economic muscle for years, extending the reach of its increasingly controversial Belt and Road Initiative (offering up to $1tn in development funding in 70 countries) out to Trinidad and Tobago as well as Guyana, and eating away at Taiwan’s remaining diplomatic presence—flipping Panama, the Dominican Republic, and El Salvador over the past 18 months, and likely tempting several others such as Haiti and Honduras. U.S. diplomacy has expressed displeasure with these developments, but threatening to shut off U.S. assistance may not be the most constructive path. In practice, it is not clear what the U.S. has so far done to compete, adds Fauriol, making the case for a new Caribbean Basin Initiative.