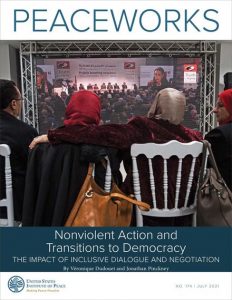 Inclusive dialogue and negotiations can facilitate democratic transitions after nonviolent campaigns, says a new report based on statistical analysis and case studies of transitions in Egypt, Tunisia, and Ukraine.

The report, from the Nonviolent Action and Inclusive Peace Processes programs at the United States Institute of Peace (USIP), presents statistical analysis of 119 dialogue and negotiation processes (DNPs) in transitions, systematically mapping inclusiveness along several dimensions, including the participation of women, presence of civil society actors at the negotiating table, and decision-making mechanisms, write authors Véronique Dudouet, a senior adviser at the Berghof Foundation, and USIP’s Jonathan Pinckney, the author of From Dissent to Democracy: The Promise and Peril of Civil Resistance Transitions (2020):

Indeed, analysis of all 108 democratic transitions between 1950 and 2010 found that “one of the most consistent and powerful explanations of substantive democratization is the length of unarmed pro-democratic mobilization prior to a transition,” City University’s Zachariah Mampilly writes for Foreign Affairs.