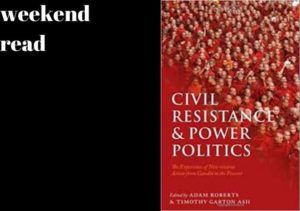 The robustness of democratic institutions in large part rests on citizen activism, according to a leading civil-resistance expert.

“Regular people should know that there are steps they can take to uphold democracy.” This is a core tenet of civil-resistance theory, also known as people power—that citizens, working in concert, have more agency than they are led to believe, says Erica Chenoweth, the Berthold Beitz Professor in Human Rights and International Affairs at the Harvard Kennedy School.

In the past fifteen years, there has been a marked global increase in what international-relations scholars call “democratic backsliding,” with more authoritarians and authoritarian-style leaders consolidating power, she tells The New Yorker’s Andrew Marantz.

“There’s no one moment when a country crosses from a democracy into an autocracy,” Chenoweth adds. “The norms and institutions can grow weaker over years, or decades, without people noticing. But there are sometimes decisive moments of contestation and confusion, and would-be authoritarians can stoke and exploit that confusion.” 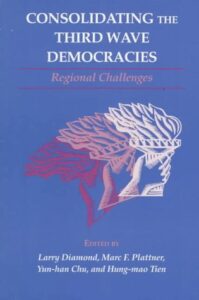 We should also take heart in the fact that peaceful transitions of power—once rare—have become more frequent in much of the world. Still, peaceful power handovers are far from the “default,” notes the CATO Institute’s Chelsea Follett. According to an analysis by The Economist [drawing on data compiled by Adam Przeworski of New York University], in the past hundred years, only about half of the world’s countries have managed even a single power‐​transfer free of coups, civil wars, or constitutional crises. The good news is that once a country does manage to secure a peaceful change of government, the practice tends to become entrenched over time and creates positive momentum for continued peaceful power‐​transitions, she writes for The National Interest.

One of scientist Peter Turchin’s most unwelcome conclusions is that complex societies arise through war, which tends to reward communities that organize themselves to fight and survive, and to wipe out ones that are simple and small-scale. The notion that democracy finds its strength in its essential goodness and moral improvement over its rival systems is likewise fanciful, Graeme Wood writes for The Atlantic:

Instead, democratic societies flourish because they have a memory of being nearly obliterated by an external enemy. They avoided extinction only through collective action, and the memory of that collective action makes democratic politics easier to conduct in the present, Turchin said. “There is a very close correlation between adopting democratic institutions and having to fight a war for survival.”

Rather than bending toward progress, the arc of history bends all the way back on itself, in a never-­ending loop of boom and bust, Wood adds. This puts him at odds with American historians, many of whom harbor an unspoken faith that liberal democracy is the end state of all history. RTWT

Join a discussion on these successes with Debebe Hailegebriel of Ethiopia, Idayat Hassan of Nigeria, Edie Crux and Ricardo Barrientos of Guatemala and the UN Special Rapporteur on the freedoms of peaceful assembly and of association, Clément Voule, on November 30 from 11 am to noon EST. Sign up to attend here.