If the democratic uprisings that swept across the states of the former Soviet Union in the early 2000s were “colour revolutions”, then Ethiopia’s counts as a multicoloured one, with flags of many hues representing its more than 80 ethnic groups, The Economist notes.

There is no mistaking the excitement that has gripped the country since April, when Abiy Ahmed took office and embarked on the most radical liberalisation in Ethiopia’s history. But the revolution risks spinning out of control, it cautions:

The wave of protests that brought Abiy to power also exposed the degree to which many Ethiopians do not regard their government as legitimate. District officials across Oromia and Amhara were often the first targets of violent unrest before Abiy took office. Tens of thousands have been replaced, but many are powerless in the face of young protesters. … Some are stockpiling weapons. …. Young Tigrayans have also been calling for weapons and training.

“The risk of chaos, anarchy and state collapse are within the realm of possibility,” says an official. 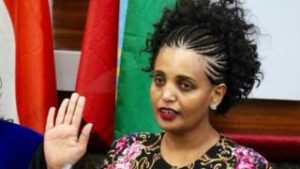 Last week Abiy appointed Birtukan Mideksa (right) as head of the board preparing for the next national elections, scheduled for 2020. Birtukan [a former Reagan-Fascell fellow at the National Endowment for Democracy and a recipient of the A. Philip Randolph Institute’s Bayard Rustin Freedom Award] was one of dozens of opposition figures arrested in the violent aftermath of a 2005 vote – when an opposition coalition stood against the government across the country, then challenged the EPRDF’s victory.

Some are urging Abiy to slow his democratic reforms and bring back the iron fist. This would be a mistake, The Economist warns:

In the short term he will need the army and police to stop ethnic violence, but under orders to show restraint. In the long run the only peaceful way to hold Ethiopia together is to persuade all its people that they have a voice. Mr Abiy should hold a credible election in 2020, which he will probably win. He should then start a process of constitutional reform to reduce the power of ethnicity in politics.

“Abiy may see no choice but to use the police and army to separate the factions and restore order,” it adds. “A more lasting solution is likely to involve strengthening state institutions. That would mean curbing the powers of his own office and ensuring that the state itself is bound by the law.”