Leaked internal Russian government polling recently indicated that as few as one in four Russians may be in favor of the war in Ukraine, says Natasha Lindstaedt, Professor of Government at the UK’s Essex University. Analysts believe that the forced mobilization of over 300,000 civilians and the high level of casualties have all contributed to waning support for Russia’s war effort, she writes for The Conversation.

There will be no lasting peace in Ukraine until there is justice and human rights, the head of the Ukrainian Center for Civil Liberties said Thursday as she arrived in Oslo to receive the Nobel Peace Prize with fellow human rights campaigners from Belarus and Russia.

“Human rights and peace are inextricably linked,” Oleksandra Matviychuk said. “A state that systematically violates human rights does so not only against its own citizens, but against an entire region, an entire world. Russia is a great example of this.”

The words of Russian propagandists also qualify as incitement, she insists. “The role of the so-called ‘journalists’ is extremely important here, who for all these eight years pumped people up with hatred and formed the image of an enemy from Ukraine and its citizens… In fact, this unprincipled work of people is a component of the military militaristic machine.”

Matviychuk (above), 2022 Nobel Peace Prize Laureate, joined NED President and CEO Damon Wilson to discuss how to ensure international justice and accountability for Russia’s alleged crimes in Ukraine. Matviychuk is head of the leading Ukrainian human rights organization Center for Civil Liberties, a NED partner and recipient of the 2021 NED Democracy Award.

Ukraine still faces the challenge of the legacy of a flawed and incomplete transition to a modern, democratic market economy after the breakup of the Soviet Union, The Times reports. Parts of its commercial world have been plagued by corruption and cronyism. And Ukraine has yet to create the kind of resilient political institutions that undergird the standards of governance set by the European Union, which is likely to be its largest trading partner if the war is won.

Ukraine is a “transition economy” and “teenage democracy,” said Tymofiy Mylovanov, a professor at the Kyiv School of Economics and a former government minister. 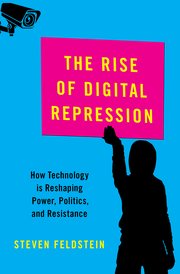 The conflict has highlighted the central role of digital technology in war and shown that technology companies can no longer stay on the sidelines of geopolitics, notes Carnegie senior fellow Steven Feldstein who was this week awarded the 2023 Grawemeyer Award for Ideas Improving World Order for his book, The Rise of Digital Repression: How Technology is Reshaping Power, Politics, and Resistance:

Big Tech firms are also in on the game. They are blocking access to Russian propaganda outlets and prohibiting Russian state media from running ads. Starlink satellite dishes are helping Ukraine maintain internet connectivity (and serving as a crucial communications link for Ukraine’s drones). Microsoft is playing a vital role in supporting Ukraine and NATO countries to counteract Russian cyber attacks.

Members of the European Parliament have awarded the 2022 Sakharov Prize for Freedom of Thought to the brave people of Ukraine, represented by their president, elected leaders and civil society.

“This award is for those Ukrainians fighting on the ground,” said Roberta Metsola, EP President. For those who have been forced to flee. For those who have lost relatives and friends. For all those who stand up and fight for what they believe in. I know that the brave people of Ukraine will not give up and neither will we.”

Has Russia’s invasion of Ukraine prompted a global political realignment akin to a new Cold War?

While there is no sign of a global pro-Russia or pro-authoritarian bloc, there is reluctance in parts of the ‘Global South’ to support the stance taken by the United States or its allies in Western Europe, writes PRIO analyst Marie Sandnes. It is likely that any such political realignment may occur among those states that did not publicly express antipathy toward Russia in the three UN votes on the war. All of the 79 states are located outside of Europe or North America, with the majority being African or Asian, and they are disproportionally non-democratic.

However, when looking only at democratic states, the majority of these have publicly engaged in diverse diplomatic interactions with both Russia and ‘the West’, she adds, which suggests an ongoing competition for geopolitical influence that operates outside of ideological differences.

Ukraine presents a threat to Putin and his inner circle because of their warfighting skills, but more importantly because of what they stand for: an open, free and authentic democracy, and a proud people determined to choose their own destiny and to protect that right for future generations of Ukrainians, adds Robert B. Murrett, a professor of practice at Syracuse University’s Maxwell School and deputy director of the Institute for Security Policy and Law. That reality represents a genuine, long-term and existential threat to the Kremlin leadership, he writes for The Hill.

Join Foreign Policy, in partnership with the Wilfried Martens Centre for European Studies, on December 12th, to discuss the manifestations of authoritarianism in Europe, risks to liberal democracies, and explore the question: have we entered a new Cold War?