Iran’s supreme leader Ayatollah Ali Khamenei responded publicly on Monday to the biggest protests in Iran in years, breaking weeks of silence to condemn what he called “rioting” and accuse the U.S. and Israel of planning the protests, AP reports.

“This rioting was planned,” he told a cadre of police students in Tehran. “These riots and insecurities were designed by America and the Zionist regime, and their employees.”

Conspiracy-obsessed, Mr. Khamenei and his henchman have always seen sinister Western hands lurking behind oppositionists, especially those who seek greater personal freedom and democracy, note analysts Reuel Marc Gerecht and Ray Takeyh. The regime has its own lexicon: demands for democracy without clerical oversight are seditious innovation, and calls for relaxation of cultural strictures are apostasy.

In Iran, state and society now exist on different planes, they write for The Wall Street Journal. The divine republic may be smug, corrupt and cruel (as more-sensitive members of the clergy acknowledge), but the theocracy genuinely believes it is following God’s blueprint. A restless citizenry chanting “Mullahs get lost!” and “We don’t want your Islamic Republic!” rejects it all.

The resurgence of women’s fight against the mandatory hijab—and its highly original, modern, and subversive form—started in June 2014, when the courageous pro-reform journalist Masih Alinejad (above) took a selfie without a veil, her hair flying in the wind, and posted it on her Facebook page, notes Ladan Boroumand, a historian and the cofounder of the Abdorrahman Boroumand Center for Human Rights in Iran. After posting the photograph, Alinejad told her:

I received messages from Iranian women saying: Don’t publish these pictures because we envy you. Soon after I published another picture of myself driving in my hometown in Iran, again without a scarf. And I said to Iranian women: I bet you can do the same. Many of them started to send me their photos without hijab, so I created a page called My Stealthy Freedom (MSF).

What began as a private act eventually became a political statement, she writes for the Journal of Democracy:

As spectacular as the demonstrations have been, however, this latest development in Iranians’ struggle against religious totalitarianism—and women’s prominent role in it—is the logical outcome of four decades of a regime that denies women fundamental rights. The history of mandatory veiling in the Islamic Republic of Iran, in fact, illustrates both the regime’s totalitarianism and how that totalitarianism has ironically nurtured a liberal-democratic worldview within Iranian society. RTWT

These protests may not force major concessions; escalating government violence and repression may shut them down or force them to change form, argues Mona Tajali, the author of Women’s Political Representation in Iran and Turkey: Demanding a Seat at the Table. But they reveal that Iranian women’s continuing protests are closely tied up with broader movements for democracy and rule of law, she writes for The Post’s Monkey Cage.

As the Cyrus Forum’s Mariam Memarsadeghi has written, the Islamic Republic looks increasingly like a “Handmaid’s Tale regime that hates women” run by “Holocaust-denying, theocratic misogynists who beat women to death for exposing their hair.”

During the Green Movement, some tried backing so-called reformist candidates, but that went nowhere, she adds. Iranians of all worldviews, lifestyles, political pasts are confronted with a basic truth, she told the Bush Institute. And that is that this regime can never be one that delivers. It’s not just that it can’t deliver freedom; it can’t deliver anything that a human needs. 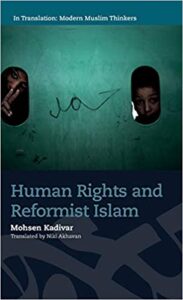 The protests against the veil are not anti-Islamic, according to Mohsen Kadivar, the author of Human Rights and Reformist Islam, Blasphemy and Apostasy in Islam and the forthcoming Governance by Guardianship: Rule and Government in the Islamic Republic of Iran. The majority of Iranians are not hardliners or fundamentalist Muslims, like the regime, but traditionalists or reformists.

“I think the demands of most of the Iranians, the majority of Iranians—I think more than 75% of Iranians today—try to find a secular, democratic regime for the future of Iran,” he adds.

“Most historians of the contemporary social movements in Iran go back to the Iranian Revolution of 1979 that toppled a modernizing monarch in favor of an unknown future government that ultimately became the Islamic Republic of Iran,” adds Duke University’s Negar Mottahedeh. “Women were in fact in the forefront in the demands for freedom and a different form of democratic and egalitarian government in Iran at the time.”

Will protests in Iran end the Islamic Republic? https://t.co/QjjGvPRMTE via @BrookingsInst