Hungary will veto the European Union’s 2021-27 budget and its COVID recovery scheme if access to funds is made conditional on governments’ adherence to the rule of law, a move which a senior EU official warned could create havoc within the bloc, Reuters reports:

Ambassadors of EU governments in Brussels will discuss the budget, its financing and any funding conditions on Monday afternoon. Hungary’s government spokesman reiterated on Monday Budapest would vote against the package, and Poland’s justice minister said Warsaw could follow suit. The nationalist governments in Budapest and Warsaw, which the EU accuse undermining the independence of courts, media and non-governmental organisations, risk losing access to tens of billions of euros in EU funds if the new conditions are introduced.

“If there is a Hungarian veto of the budget, there will be a crisis,” a senior EU diplomat involved in the preparations for the ambassadors’ meeting said.

RFE/RL’s Hungarian Service has obtained leaked audio recordings, journalists’ testimony, and internal e-mails that show how editors at state broadcaster MTVA instructed reporters on what should be reported and how the story should be told, apparently with an eye to pleasing the government.

Hungary has become a hybrid regime, somewhere in between democracy and dictatorship, says Péter Krekó (above), executive director of Budapest-based Political Capital, a partner of the National Endowment for Democracy (NED). A new U.S. administration is likely to be “much tougher on Hungary, on democratic backsliding, and corruption related to Chinese and Russian investments,” he told Deutsche Welle. 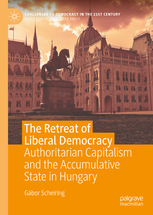 Two seemingly contradictory tendencies are crucial for the stability of illiberalism in the country, argues Gábor Scheiring, the author of The Retreat of Liberal Democracy: Authoritarian Capitalism and the Accumulative State in Hungary:

The stability of the regime increasingly depends on authoritarian-populist fixes. However, despite the crass classism of upwards redistribution under Orbán’s business-friendly regime, a significant section of workers still supports the illiberal state because it presents itself as a break with the pre-2010 liberal era, Scheiring writes for the London-based Foreign Policy Centre.