Iran’s supreme leader Ali Khamenei is doubling down on his regime’s policies of persecution, power projection and terror by appointing hard-line loyalists in a bid to ensure that critical state institutions remain faithful to the “principles” of the Islamic Revolution of 1979, analyst Adam Ereli writes for UPI:

Khamenei is spearheading an initiative that his office has dubbed “youth orientation” that is designed to inculcate in Iran’s younger generation the ideals of Islamic Revolution. Mohammad Javad Haj Ali-Akbari, a former student of Khamenei, is now Tehran’s Friday prayer leader and the youngest Friday prayer imam in Iran. Mohammad Ali Al-e-Hashem, who previously served in the IRGC, is a representative of the supreme leader and now the Friday prayer leader in Tabriz.

“The impact of this rightward tilt is clear for all to see,” he adds. “On March 15, the human rights lawyer Nasrin Sotoudeh — awarded the European Parliament’s Sakharov Prize for Freedom of Thought in 2012 — was sentenced to a staggering 38 years in prison and 148 lashes as punishment for defending women being prosecuted for peacefully protesting Iran’s compulsory hijab law.”

A court in Tehran will soon decide whether trying to protect the environment is a capital offence in Iran, note international human rights lawyer Irwin Cotler and Dr. Ladan Boroumand (above), founder and research director of the Abdorrahman Boroumand Foundation for Human Rights in Iran.

Eight members of Iran’s most prominent environmental organization, the Persian Wildlife Heritage Foundation (PWHF), are being tried for simply conducting surveys of the endangered Asiatic cheetah. Four face the death penalty, including a British-Iranian-American citizen, while the rest face more than a decade in prison, they write for the Globe and Mail:

The environmental community, including organizations within PWHF’s network, should intensify its advocacy on their behalf. And the United Nations can take the lead in this regard since PWHF has extensively co-operated with the UN and is a beneficiary of its Small Grants program. Additionally, the EU can leverage its €50-million support package to Iran, including a large portion for environmental challenges, to ensure that environmental work is not criminalized.

Canada can take concrete action by invoking the recently passed Magnitsky Act and implement targeted sanctions – in the form of travel bans and asset freezes – against the top human-rights violators in Iran, add Boroumand, of the Omid Memorial Human Rights Library, and a Reagan-Fascell Fellow at the National Endowment for Democracy, and Cotler, who currently chairs the Raoul Wallenberg Centre for Human Rights. 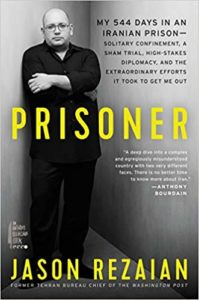 Arresting journalists only makes democracy more fragile, says Jason Rezaian, author of Prisoner: My 544 Days in an Iranian Prison—Solitary Confinement, a Sham Trial, High-Stakes Diplomacy, and the Extraordinary Efforts It Took to Get Me Out. Regardless of an inmate’s innocence or guilt, however, two things can’t be denied, he writes for the Washington Post:

“If you haven’t spent significant time in prison, you’ve missed one of the essential aspects of the human social experience,” I write in my book. “You’re lesser because of it.”

What are the likely scenarios that might unfold following Khamenei’s long tenure? More broadly, how might Iran’s domestic and foreign policies change under a new supreme leader? asks Saeid Golkar, a visiting assistant professor of political science at the University of Tennessee at Chattanooga. In the absence of any foreseeable fundamental change, observers of Iran agree on two premises regarding the future, he writes for Middle East Policy:

Because Ayatollah Khamenei has always supported a conservative, hardline agenda and worked against any form of “democratization” or “normalization” of the Islamic Republic, the opportunity for change from above may only come after he leaves the scene.

Gradual institutional reforms will not be sufficient for real change, nor can the government be reformed without fundamentally rethinking its commitment to the role of religion in politics and civic life, argues Misagh Parsa, author of Democracy in Iran: Why It Failed and How It Might Succeed. For Iran to democratize, the options are narrowing to a single path: another revolution.

“Iran is already on the far right, by international standards,” he contends. “In the absence of popular movements for democracy or in response to the rise of such an [extreme right] movement, it is also possible for the IRGC to directly enter the political arena and establish a military regime.”

Civil and human rights organizations have warned people that the Islamic Republic of Iran (IRI) could resort to using armed foreign groups to prop up its regime, analyst Raman Ghavami adds.

“Iran has used these groups in Syria to suppress and kill Syrians. There is no reason why the IRI will not use them against its own people,” said the Tavaana E-Learning Institute for Iranian Civil Society.

While having a pragmatist as the next supreme leader does not guarantee the democratization of the Islamic Republic, a hardliner will likely move Iran toward more authoritarianism domestically and more aggressive interventionism abroad, Golkar adds:

A hardline supreme leader will probably continue Khamenei’s internal and external policies, the Islamization of Iran, and the strengthening of the Axis of Resistance. It will also perhaps block the possible process of normalization and de-radicalization. A weak leader, chosen with the help of the IRGC and Ayatollah Khamenei’s office, will be a puppet in the hands of the Guard commander.