The killing of a Muslim cleric who demonstrated over poor public services in Basra undermines the pillars of democracy in Iraq, a member of the parliament-elected Iraqi High Commission for Human Rights (IHCHR) told The National.

Sheikh Wissam Al Ghrawi was shot and killed by unknown assailants outside his home after he encouraged protesters to take up arms over Basra’s poor public services, police said. He was filmed at a protest on Friday saying clerics would issue a fatwa within days on taking up arms. The video was shared widely on Iraqi social media.

“Unfortunately, peaceful demonstrations in Iraq have always been accompanied by arrests of demonstrators and lawsuits against them by political parties,” said IHCHR’s Dr Ali Al Bayati. “Every peaceful and civilian demonstration led by a group of young activists is followed by the forceful disappearance of a number of these young people.”

With the choice of the economist Adil Abdul-Mahdi as the new Iraqi Prime Minister, he faces the daunting task of guiding the government through necessary economic reform, service quality improvement, and reconstruction, says Iraqi economic expert Ahmed al-Hajj, a member of the Iraqi Federal Parliament, and member of the Governorate Council of Sulaymaniyah. Economic issues represent one of the most major challenges in Iraq today, and in order to truly effect change, Adbul-Mahdi must alter a single-source economy, major public debt, weak monetary policy, a fragile banking system, and financial corruption, he writes for the Fikra Forum.

Iranian-allied militias are preparing to call the shots in Iraq’s parliament, raising fears of an Iraqi version of Iran’s Revolutionary Guards, Reuters reports:

Among Iran’s Iraqi allies is the Badr Organization, which won 21 seats at the election. For two decades, Badr’s leader Hadi al-Amiri led the fight against Saddam Hussein from exile in Iran. A Badr local commander, Karim Nouri, said communication with Iran was ongoing “to keep Tehran’s rivals – the United States and Saudi Arabia – in check.” He did not elaborate.

Iran was in touch with Shi’ite politicians “in order to have a means of applying political pressure, to guarantee their loyalty, to make sure they have an armed force loyal to them,” said Hisham Hashemi, a security adviser to Iraq’s government. “They provide advice on PR, propaganda, marketing, media, speeches, social media.”

Five months after Iraq’s national elections, the new government’s policies have yet to be determined. Against this precarious backdrop, recent polling data reveal surprising trends in public preferences on a variety of pressing governance and security issues, The Washington Institute for Near East Policy notes.*

The Iraqi Islamic Party has demonstrated resilience over the last fifteen years, but unless it can increase its popularity, it is unlikely to regain a meaningful role in governing Iraq, argues Muhanad Seloom, an associate lecturer at the University of Exeter’s Institute of Arab and Islamic Studies.

The IIP’s current trajectory suggests it seeks to distance itself from the Muslim Brotherhood in order to improve its relationship with local, regional, and international political actors. However, detaching itself from the Brotherhood need not mean rejecting all its ideas, he writes for Carnegie’s Diwan bulletin: 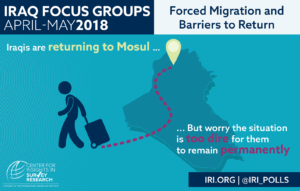 A main challenge the IIP will have in the next four years is reconciling its institutional and ideological approaches to governance—in other words, participating in government institutions while also pushing for a bottom-up approach that would help rally its established base. By reconciling these aspects of its postwar political identity, the IIP might again enhance its role in Iraq’s power structure.

*To discuss the political calculations underlying these trends and how they might affect Iraq and its neighbors, The Washington Institute is pleased to host a Policy Forum with three experts who conduct extensive polling in the region.

Munqith Dagher is the founder and CEO of the Baghdad-based Al Mustakilla Research Group (IIACSS). One of Iraq’s most prominent public opinion analysts, he specializes in conducting polls during times of conflict. His surveys about life under the Islamic State and Iraq’s election results have been widely published in English and Arabic.

Ahmed Ali (right) is a program officer at the National Endowment for Democracy, where he directs the Iraq program. An expert on Iraqi politics and security, he previously led research initiatives at the Education for Peace in Iraq Center and the Institute for the Study of War.

David Pollock is the Bernstein Fellow at The Washington Institute and director of Fikra Forum. Previously, he served as senior advisor for the broader Middle East at the State Department, and as chief of Near East/South Asia/Africa research at the U.S. Information Agency, where he supervised the government’s study of regional public opinion, elite attitudes, and media content.