Mexico is a relatively young democracy with historically weak institutions including a corruption-riven judiciary and powerful, politically-motivated unions. Now some investors and analysts fear that in pursuing the mirage of a return to the golden era of growth of half a century ago, with the state firmly in the driving seat,  President Andrés Manuel López Obrador [aka AMLO] is flirting with the sort of demagoguery that could take Mexico down a dangerous populist path….[noting that] there are at least some echoes of the late Hugo Chávez in Mr López Obrador’s early moves, The Financial Times reports:

Like Chávez, he has boundless faith in himself as a saviour, taking on elites on behalf of the poor majority. Both pursued grandly-titled projects of national renewal — Mr López Obrador calls his the “Fourth Transformation” and promises it will be as epoch-defining as independence and liberal reforms in the 19th century and the Mexican Revolution 100 years ago. While Chávez rewrote the constitution into a “little blue book”, Mr López Obrador is condensing his economic vision into a tome called The Moral Economy, due out on December 1, to coincide with his first anniversary in office.

“There is a sense that history begins with him, that nothing of the past works and that he has to start a new era,” says Enrique Krauze, a prominent historian who has clashed with a president he once dubbed a “tropical messiah”. “He is not only taking decisions — good or bad — on economic policy but also institutions, which took so much effort to build. I’m truly worried.”

“He doesn’t believe in institutions,” says Mr Krauze, author of Mexico: Biography of Power, “he believes in himself.” 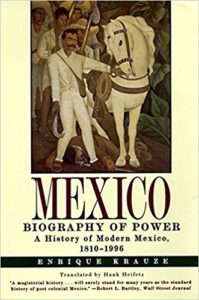 With funding from the National Endowment for Democracy, the International Republican Institute developed new violence prevention and open government communication toolkits to support community efforts to addressing violence and corruption by giving citizens the information they need to help campaign for a safer more transparent society.

The physical toolkits are compact information boxes that present complex information about Mexico’s violence prevention policy and open government commitments in accessible and easy to understand flash cards. In addition to the physical boxes, the digital version of the toolkit features videos, GIFs, infographics and other digital images that can be used for social media campaigns.

To-date, IRI has distributed more than 1,000 toolkits in-person to government officials and civil society organizations in Mexico and will continue to work with the Interior Ministry and other national actors to raise awareness about these important topics. To check-out the toolkit for violence prevention click HERE and for open government click HERE.