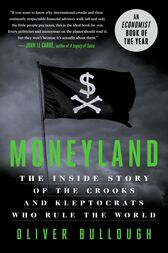 The British journalist Oliver Bullough’s “Moneyland,” provides a glimpse into a shadow system of trillions of dollars of hidden assets that transcends nations, feeds corruption and “quietly but effectively” is “impoverishing millions, undermining democracy, helping dictators as they loot their countries,” notes author and investor Zachary Karabell.

Bullough brilliantly uncovers the scope of hidden money, but whether that represents an existential threat to democracy remains an unresolved, and crucial, question, he writes for The New York Times.

A groundbreaking case of strategic litigation, known as the Bien Mal Acquis (‘ill-gotten gains”) case, made its way through the French courts over the past decade. In the case, French prosecutors set their sights on the leaders of Congo-Brazzaville, Gabon, and Equatorial Guinea for assets acquired on French soil that were allegedly purchased with ill-gotten gains and involved fraud or money laundering. The prosecutors worked with a network of NGOs to bring the case forward, and on October 27, 2017, Equatoguinean Vice President Teodoro Nguema Obiang became the first actively serving foreign senior official to be tried and convicted in French courts on charges of diverting corruptly acquired funds into investments on French territory.

A new working paper, “To Catch a Kleptocrat: Lessons Learned from the Bien Mal Acquis Trials in France,” by Tutu Alicante, captures the story of the Biens Mal Acquis trial against Vice President Obiang and offers lessons learned for civil society organizations interested in using strategic litigation in outside courts to combat transnational kleptocracy.

Download the full working paper or read the executive summary.