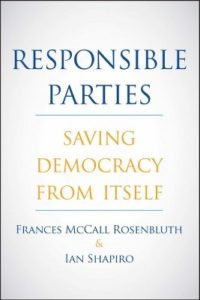 Some political scientists contend that “[s]eemingly minor variations in the institutional setup of democracies” determine the different ways in which states behave, while “supposedly ‘primordial’ factors, such as ethnicity, could not predict which countries might experience civil strife…because specific political institutions either exacerbate or attenuate how dangerous such social divisions become,” he writes for The New Yorker.

Institutions such as political parties……

The most important ingredient of a functioning democracy, Frances McCall Rosenbluth and Ian Shapiro argue, in “Responsible Parties: Saving Democracy from Itself” (Yale), is strong political parties that can keep their rank-and-file members in check, adds Mounk, a contributor to the National Endowment for Democracy’s Journal of Democracy:

In a successful political system, the authors say, two big parties compete for popular support by developing and implementing a cohesive platform. Unlike individual candidates, who might stay in power for only a few years, such parties have a vested interest in maintaining a good reputation over the course of decades. And unlike political newcomers, who may have little sense of what governments can actually achieve, they have the experience and the financial resources to develop effective proposals for political reform. Thanks to “long-view horizons” and “incentives to invest in relevant information about the effects of policy choices,” strong parties are more likely to promote the interests of the general public.

“The political stability of Costa Rica, they show, is in part due to the fact that the country has ‘closed’ party lists, which insure that legislators get reëlected only if they stay close to the Party’s platform,” Mounk notes. “Many other Latin American countries, by contrast, have ‘open’ party lists, which allow legislators to take their case directly to the voters—thus giving them an incentive to command media coverage, or to demand local pork in return for supporting the government.”