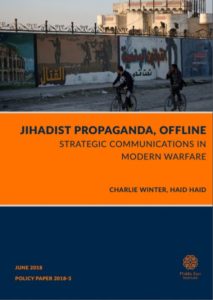 Insurgent strategic communication has rarely posed as great a threat to regional and international security as it does today in Syria, where jihadists are using it to aggressively advance their short- and long-term interests, according to a new Middle East Institute analysis.

The report compares and contrasts the in-theater outreach strategies of the Islamic State in Iraq and al-Sham (ISIS) and Hay’at Tahrir al-Sham, tracking how each has used propaganda and censorship to entrench its rule over local constituents in recent years. It demonstrates that, notwithstanding the fact that both organizations share the same ideology, there are significant tactical and strategic disparities between their respective approaches toward public diplomacy, according to Haid Haid and Charlie Winter, analysts at the International Centre for the Study of Radicalisation (ICSR).