Jailed Kremlin critic Vladimir Kara-Murza could face an additional 10 years in prison on newly unveiled charges of spreading “false” information about the Russian military, The Moscow Times reports. Kara-Murza, who has spoken out regularly against Russia’s invasion of Ukraine, is currently serving the remaining five days of his 15-day administrative jail sentence on charges of disobeying police orders.

Russia launched a criminal case against Kara-Murza for “public dissemination of knowingly false information about the use of the Armed Forces of the Russian Federation,” his lawyer, Vadim Prokhorov, wrote in a Facebook post. He added that his client was questioned at the Investigative Committee with regard to the case, but he did not given any further details, RFE/RL adds.

Democracy and human rights advocates have called on Russian authorities to release Kara-Murza and all other imprisoned political and civil society leaders arbitrarily detained for exercising their rights. A Moscow court will hear an appeal to dismiss the case against Kara-Murza tomorrow—all charges should be dropped and Kara-Murza should be immediately released.

“We express our solidarity with Vladimir Kara-Murza (above, second left)  and all citizens of Russia imprisoned for their democratic aspirations,” said the signatories (see below). “The international community must take all possible actions to ensure their immediate release.”

An outspoken voice for democracy and human rights in Russia for over 20 years, Kara-Murza’s arrest followed a CNN interview, testimony at a Helsinki Commission hearing, and other public remarks denouncing President Vladimir Putin’s unprovoked and unlawful aggression against Ukraine, the National Endowment for Democracy (NED) adds. In May 2015 and February 2017, Kara-Murza suffered two near-fatal medical emergencies as the result of poisoning that was traced to Russian state agents, increasing the danger of his current detention.

NED President and Chief Executive Officer Damon Wilson described his last conversation with Kara-Murza before returning to Russia in April 2022. 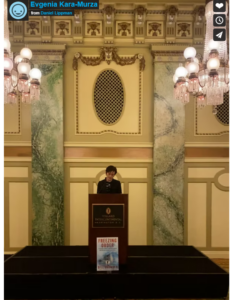 Even after two poisonings, Kara-Murza will not stop fighting, his wife, Evgenia, told PRI’s The World. “Even if I bring him back, he will continue his fight and he will probably go back and continue it there. He’s an amazing person and a true Russian patriot,” she said. “You know, he’s the true Russian patriot because he believes that you cannot equate the country to its regime.”

At a Washington launch party for Bill Browder’s new book, “Freezing Order: A True Story of Money Laundering, Murder, and Surviving Vladimir Putin’s Wrath,” she addressed the crowd (above), reading a letter from her husband (see here), POLITICO reports.