A significant majority of Arab citizens favor a democratic political system, with 76% in favor and only 17% opposed, according to the largest opinion poll of its kind released by The Arab Center for Research and Policy Studies (ACRPS). Some 74% of respondents believe a pluralist democratic system is appropriate for their countries. Yet, with almost 30,000 respondents across 13 Arab states and more than 900 researchers, the survey revealed division on the question if whether MENA societies are “prepared to practice” democracy.

The Arab public has a negative view of Islamic State or ISIL (92 percent), while a small majority views the Arab Spring as positive.

Support for democracy was highest in the Levant and Maghreb, but the largest bloc of opinion (57%) said their priorities are economic, with more than half of respondents citing unemployment, high prices, poor economic conditions, and poverty as the most important challenges facing their country. Some 16% cited priorities related to government performance and policies, including poor public services, financial and administrative corruption, governance, and problems of democratic transition. 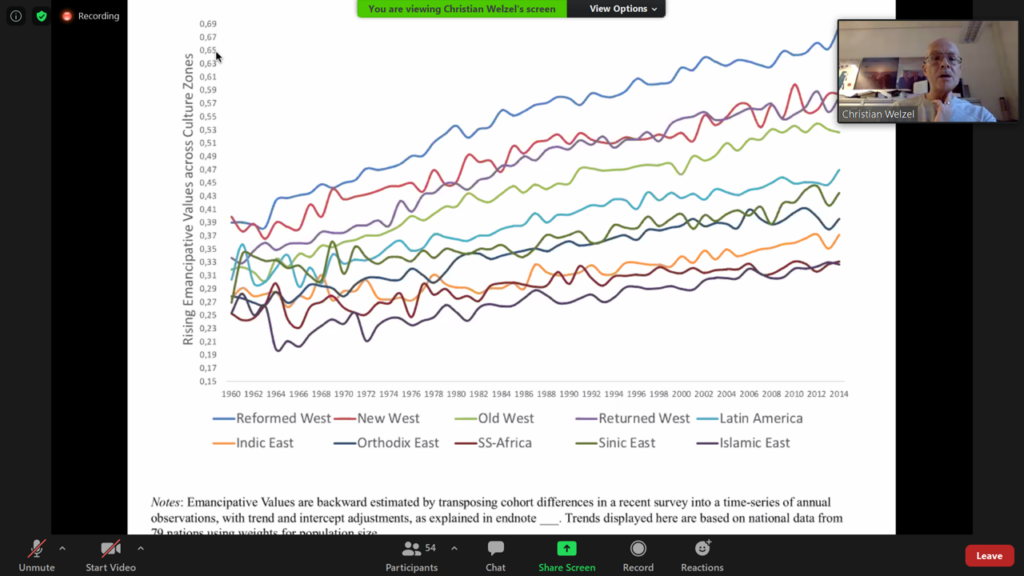 Recent accounts of democratic backsliding neglect the cultural foundations of autocracy-vs-democracy, argues Christian Welzel of the World Values Survey. To “bring culture back in,” he shows that

The explanatory power of culture zones over autocracy-vs-democracy lies in the cultures’ differentiation on “authoritarian-vs-emancipative values,” he told the Laboratory for Comparative Social Research:

Against this backdrop, regime change happens as a result of glacially accruing regime-culture misfits — driven by generational value shifts into a pre-dominantly emancipatory direction. Consequently, the backsliding of democracies into authoritarianism is limited to societies in which emancipative values remain under-developed. Contrary to the widely cited deconsolidation-thesis, the prevalent generational profile in people’s moral orientations exhibits an almost ubiquitous ascension of emancipative values that will lend more, not less, legitimacy to democracy in the future.

Other key findings of the ACRPS poll:

The full report can be accessed here.

The Egyptian regime has reacted in an unexpected way to the global pandemic—with civilian, technocratic, and expert bodies leading the way and even some (admittedly officially patrolled) political debate being allowed to emerge, Stanford CDDRL’s Program on Arab Reform and Democracy observes. A forthcoming talk examines recent developments and evaluates whether they mark a real change in Egyptian governance, and if so, why, what kind, and will it last.

Egyptian Governance and the Pandemic

Why Did Egyptian Democratization Fail? asks POMED, a partner of the National Endowment for Democracy (above).