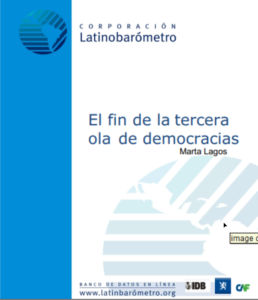 For decades, Latin America looked like one of the great success stories of democratization. One after another, countries that had been ruled by dictatorships broke the shackles of military rule and embraced free elections. Strong majorities across the region consistently agreed that democracy was the best system of government, analyst Frida Ghitis writes for World Politics Review:

But that progress masked the shallow roots of Latin American democracy. Today, even if military coups seem safely relegated to the past and Marxist insurgencies have been soundly defeated, the future of democracy in the region is far from assured. That’s the conclusion of an alarming new report by the respected polling firm Latinobarometer, which warns

that Latin America is in grave political peril.

In a strikingly somber analysis, Marta Lagos, the head of the Chile-based public pollster, describes 2018 as the region’s “annus horribilis.” The extensive annual public survey revealed the region’s worst results on record, with every indicator about the health of democracy deteriorating, and many of them at their worst levels since the survey started in 1995.