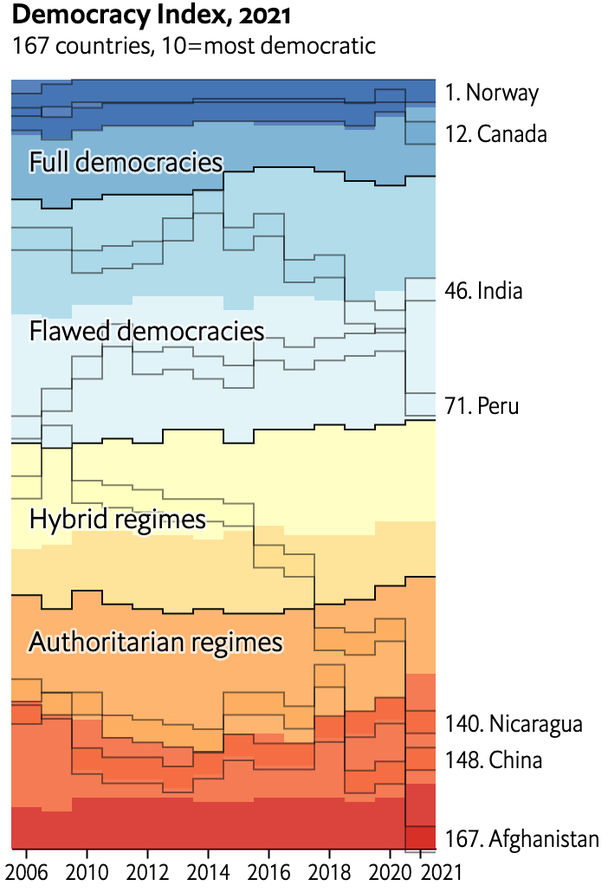 Less than half (45.7%) of the global population lives in a democracy – a pronounced decline from 2020 (49.4%), according to The Economist Intelligence Unit’s annual Democracy Index.

Even fewer (6.4%) reside in a “full democracy”; this level is slightly down from 8.4% in 2020, after two countries (Chile and Spain) were downgraded to “flawed democracies”, the EIU reports. Substantially more than a third of the world’s population (37.1%) live under authoritarian rule, a large share of which are in China, according to EIU’s measure of democracy, which registers an overall score of 5.28, down from 5.37 in 2020 –  the biggest fall since 2010.

The annual survey, which rates the state of democracy across 167 countries on the basis of five measures—electoral process and pluralism, the functioning of government, political participation, democratic political culture and civil liberties— finds that more than a third of the world’s population live under authoritarian rule, The Economist adds.

Covid-19 has “compounded existing negative trends,” the report adds, with an “unprecedented withdrawal of civil liberties among developed democracies and authoritarian regimes alike” in the second year of the pandemic.

Lockdowns, travel restrictions and Covid vaccination passes for participation in public life has led to the “normalization of emergency powers, which have tended to stay on the statute books” and “accustomed citizens to a huge extension of state power over large areas of public and personal life”.

In 2015 US democracy scholar Larry Diamond coined the phrase “democratic recession” to describe the retreat of democracy globally since 2006 (Journal of Democracy, Vol 26, Issue 1, January 2015), the EIU notes. His diagnosis has been confirmed by the results of EIU’s Democracy Index over the past 15 years, during which time 108 of the 167 countries (65%) covered have recorded a decline in their total index score or have stagnated.

There were 13 changes of regime type in 2021—nine negative and four positive, the report adds: 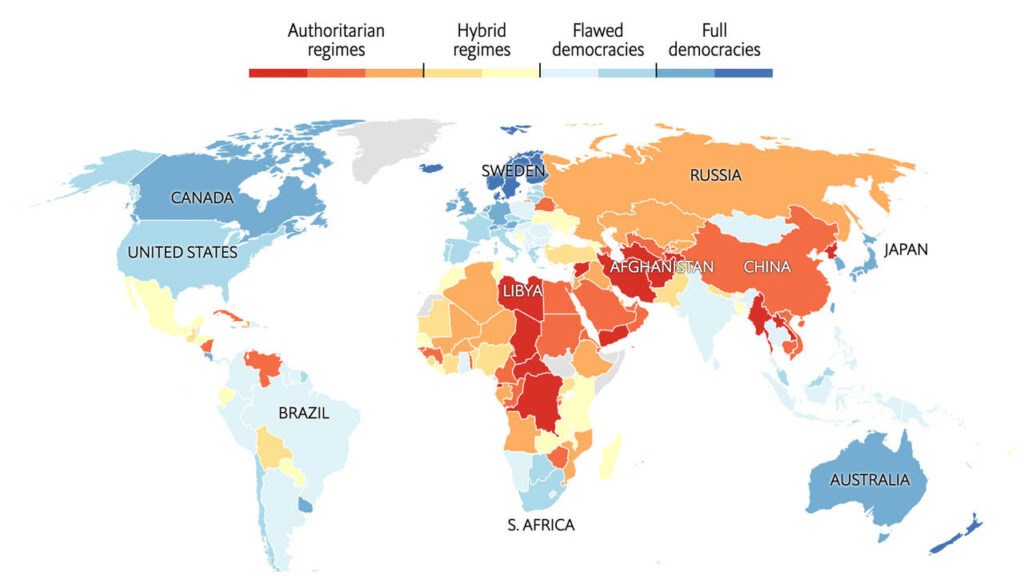 The majority of countries registered a deterioration in their average score or stagnated in 2021, with only 47 (28.1%) of a total of 167 recording an improvement, the index adds:

About 74 (44.3%) recorded a decline in their total score compared with 2020. The other 46 (27.5%) stagnated, with their scores remaining unchanged from 2020. There were a few improvements and some dramatic declines, with Moldova and Indonesia registering the biggest improvements, measured by the change in their overall scores, and Afghanistan, Myanmar and Tunisia the biggest declines. A large number of Latin American countries recorded steep falls in their overall scores.

Top and bottom: Afghanistan displaces North Korea, and Norway remains in first place. At the bottom of the rankings, there was a dramatic change, with Afghanistan and Myanmar displacing North Korea to take the bottom two places. Two war-torn African countries, the Democratic Republic of Congo and the Central African Republic sit above North Korea to fill the bottom five slots. Syria, Turkmenistan, Chad, Laos and Equatorial Guinea make up the others in the bottom ten. The Nordics (Norway, Finland, Sweden, Iceland, Denmark) dominate the top tier of the Democracy Index rankings…. 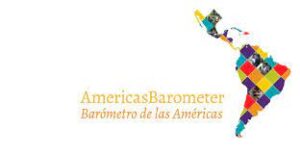 Latin America records the biggest downgrade. Latin America suffered a big setback in 2021. The change in the region’s score in 2021 was the biggest year-on-year decline experienced by any region since the start of the Democracy Index in 2006. It was accompanied by five country downgrades in terms of regime types (one from “full” to “flawed”, three from “flawed” to “hybrid” and one from “hybrid” to “authoritarian”)…..

The “most improved” countries are not always the best. The ten most improved countries in the Democracy Index, as measured by the size of the improvement in their overall score, are Zambia, Indonesia, Qatar, Moldova, India, the Democratic Republic of Congo (DRC), Montenegro, Guyana, Uruguay, and, in joint tenth place, the UAE and Singapore. The modest size of the improvements for these best-performers is overshadowed by the scale of the deterioration for the ten worst performers…. RTWT