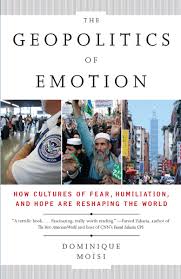 In the late 1970s and early 1980s, prominent international relations experts such as the late French political philosopher Pierre Hassner argued that the world was witnessing a process of competitive decay between the United States and the Soviet Union, argues Dominique Moisi, a special adviser at the Institut Montaigne in Paris, and the author of The Geopolitics of Emotion. or La Géopolitique des Séries ou le triomphe de la peur.

By 1989, the verdict was clear: The Soviet Union had atrophied much faster than the US, and its empire collapsed, the victim of its own errors and contradictions. Today, the concept of competitive decay of ideological and political models seems to be relevant once again, he writes for Project Syndicate:

Reports of the demise of democracy and freedom, and the victory of populism and authoritarianism, are thus premature. If anything, the longing for freedom and democracy is on the rise. This suggests that reason has not yet been crushed by negative emotions….As the Franco-Lebanese writer Amin Maalouf has said, it is “better to err with hope, than to be right with despair.” Contrary to what many democratic Cassandras think, the worst is not inevitable. Authoritarians and populists have not yet triumphed, and in many places, democrats are fighting back.

Or, to put it less optimistically, democracy and autocracy still have similar chances of decaying. For now, it remains uncertain which model will prevail. But it is never wise to write off democracy, much less hasten its downfall. Moisi concludes. RTWT