Following four-plus years of assault by the ruling Law and Justice (PiS) party, the embattled Polish judiciary may be on its last legs. On 4 February, amid mass domestic and international protest, Polish president Andrzej Duda signed into law a deeply-controversial set of new reforms openly defying the authority of the EU’s top court and seeking to prevent Polish judges from applying EU law under penalty of suspension, fines, salary cuts and dismissal, note analysts ELENA CRESPI AND JOSHUA RATLIFF.

The power consolidation strategy pursued by the Law and Justice government since it came to power in 2015 has taken repeated aim at judicial restraints on the government’s ability to act, and represents at its core an effort to dismantle the very checks and balances that characterize democratic forms of government, they write for the EU Observer:

Modelled in many respects on the same blueprint for democratic decline followed in Hungary by strongman Viktor Orbán and his ruling Fidesz party – which, within less than a decade, has managed to overturn the fundamental tenets of European constitutional order and supersede them with the political oxymoron dubbed ‘illiberal democracy’ – the government in Poland has sought to fuse the ruling party and the state.

But some conservative observers insists that the ruling Law and Justice party is not seeking to undermine democracy but to challenge liberal orthodoxy.

These two faces—one proposing a set of political ideas, the other insisting that because of its unique inclusiveness and openness, only liberalism can be the basis for a just society—have fused, he writes for First Things. Liberalism as a specific political doctrine, one of many, identifies itself with liberalism as a super-theory and imposes itself on modern society as obligatory and above discussion. 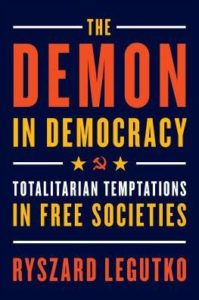 Individual freedom cannot be wholly determined by and immersed in the dogmas and presuppositions of the reigning political ideology, whether monarchic, socialist, liberal, or democratic, Legutko argues. Liberalism and its development into a super-theory make it difficult for human beings to attain such a perspective. Two factors are at work:

The combination of these two elements, plus the general thoughtlessness of liberal society, creates a mental trap, Legutko insists: The more one sees one’s independence in liberal terms, the more one succumbs to ideological conformity; the more one thinks of oneself as a master bearing innumerable rights, the more one resembles the Aristotelian slave.

Some observers have insisted that conservative critics of liberal democracy like Legutko seek the restoration of “essentially majoritarian democracy resting on constitutional liberal guarantees of free speech, free association, free media, and other liberties,” notes Marc F. Plattner, the founding coeditor of the Journal of Democracy and the cochair of the Research Council of the National Endowment for Democracy’s International Forum for Democractic Studies.

But there is “no evidence” in his recent book, The Demon in Democracy: Totalitarian Temptations in Free Societies, that Legutko himself sees his aim to be that of restoring liberal democracy to the healthier condition that it enjoyed in previous centuries,” he wrote for The Journal of Democracy. “I think he wants it to be superseded by other kinds of governments and societies, presumably including those that PiS and its leader Jarosław Kaczyñski are trying to build in Poland.”

While liberalism is frequently linked to democracy and capitalism, its precise relationship with them is nonetheless not obvious; liberals have not always been democrats and probably need not be capitalists, notes Daniel Luban, a junior research fellow in politics at Oxford University.

Liberalism can equally refer to a set of political principles (freedom and equality, for instance, or individual rights) or to a certain political style (conciliatory and consensus-driven, or gradualist and anti-utopian). There may be a broad affinity between the principles and the style, but they don’t always go together, he writes for Dissent.

indeed, the starkest alternative to liberalism currently on offer is not democracy, or socialism, or communitarianism—all of whose tensions with liberalism, however real, are likely not irreconcilable—but an authoritarian capitalism that is equally opposed to all of these possibilities, Luban contends.