As Malaysia’s most powerful man, Najib Razak worked hard to keep the public from accessing information about a multi-billion dollar scandal at state fund 1MDB. Now they just might find out all the juicy details, Bloomberg reports:

Only three days after 92-year-old Mahathir Mohamad secured a shocking election win, he barred Najib from leaving Malaysia and said he’d reopen a graft probe targeting the fund. He also said he was replacing the attorney-general who cleared Najib and instructed the auditor-general to declassify a 1MDB report that was protected by the Official Secrets Act.

Malaysia’s election this week was expected to provide more evidence that democracy in Southeast Asia was in an inexorable retreat. Instead, it became a powerful beacon for people power, the AP adds:

Mahathir is now the world’s oldest elected leader and, analysts say, seems intent on using what may be the final chapter of his life to clean up Malaysia — he called it a “mess” — and fashion a more positive legacy.

But hard questions now face the opposition coalition, which unites an array of parties that draw on widely different groups of voters and have different platforms, Council on Foreign Relations analyst Joshua Kurlantzick writes in a World Politics Review article.

Mahathir has a unique opportunity to change the one and only thing holding Malaysia back: the bumiputera, or “sons of the soil” policy, argues James Chin, director of the Asia Institute at the University of Tasmania and an expert on Southeast Asia:

Launched in 1971 as the New Economic Policy (NEP), this set of programs sought to restructure Malaysian society and increase economic and educational opportunities for the ethnic Malay majority. Nobody, then and now, took issue with these aims. The Malay population had no real stake in the private sector at the time and, even now, they lag behind the Chinese and Indian communities in educational achievement and incomes.

It’s unlikely that Anwar Ibrahim (left), who has argued for reforming affirmative-action policies, would undo Mahathir’s actions once in office, he writes for Bloomberg.

It’s the first time since the country became independent in 1957 that its ruling party, the United Malays National Organization (UMNO), with its massive patronage machine, has been voted out of power. The now-ousted Prime Minister Najib Razak had squelched investigations into the multibillion-dollar 1MDB corruption scandal [described as “kleptocracy at its worst”] and had done all he could to handicap the Alliance of Hope, with last-minute gerrymandering of election districts, heavy restrictions on the media, and the imprisonment or disqualification of opposition leaders. But in a political world dominated by social media and instant communication, Mr. Najib couldn’t do enough to tip the scales. 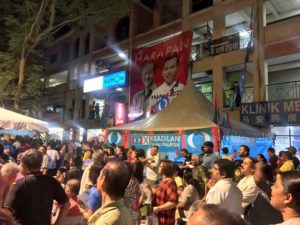 “What has happened in Malaysia tells people: Even if it’s not a level playing field, don’t give up,” said Stanford University’s Larry Diamond. “There is no reason to give up on democracy. There is still a lot of democratic ferment in the world.”

The appointment of Lim Guan Eng to the Treasury itself immediately sent ripples of hope across the land that Mahathir intends to bring a new inclusiveness to the nation, Malaysiakini adds.

There will be many, especially among the extremist Malay ethno-sectarian groups and martial arts fellowships who often serve as street-level enforcers for UMNO warlords, who will not be happy with the outcome of these elections, notes Clive Kessler of the University of New South Wales. These individuals have both the inclination and capacity to demonstrate their discontent; they have a record of turning to street actions to create civil unrest, he writes for the East Asia Forum:

If they now choose this path, the new government may have its room for manoeuvre curtailed — if it is not set aside completely to permit a takeover by a non-elected administration, as happened in 1969. One must remember here that Malaysia’s elections chose not only a federal government but also a dozen state administrations. While nine of these are clearly of an UMNO/BN or Pakatan hue, the results in three states — including the two principal peninsular states of Perak and Kedah — are on a knife-edge.

“There is a lot of work to be done to undo the years of unbridled power,” said Cynthia Gabriel (right), executive director of the nonprofit Center to Combat Corruption and Cronyism, based in Kuala Lumpur. “But for now, the power has been returned to the Malaysian people, as we have ushered in a two-party system,” said Ms. Gabriel.

The 1MDB affair revealed the complicity of global financial institutions, including major international banks, in kleptocratic money laundering, Gabriel wrote for the National Endowment for Democracy’s Journal of Democracy.

For Malaysian politics, the impact of Mahathir’s victory is far from certain, notes HuiHui Ooi, an associate director in the Atlantic Council’s Scowcroft Center for Strategy Security:

Will it push BN to combine forces with Malaysia’s conservative Islamic party (PAS) and increasingly pursue an Islamist agenda? Or will BN be forced to do some soul-searching and rethink how it could best serve Malaysia’s citizens?

Regardless, Malaysia now has the opportunity to serve as a shining new example of a Muslim-majority country that is moderate, multiracial, democratic, and open, if the new government makes the right moves, Ooi writes for the Diplomat.