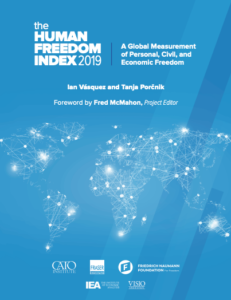 The annual Index uses 76 indicators of personal, civil, and economic freedom in 162 countries for 2017, the most recent year for which sufficient, globally comparable data are available. The report finds that global freedom has declined slightly since 2008, with more countries (79) seeing a fall in their levels of freedom than seeing an improvement (61)…..My coauthor Tanja Porcnik and I also find a strong relationship between economic and personal freedom, suggesting that if you want to live in a country that has high levels of personal freedom, you should choose a place with relatively high levels of economic freedom. Overall freedom is also correlated with significantly higher incomes per capita ($40,171 for the top quartile countries vs. $15,721 for the bottom quartile) and with democracy (see graph above).

Read more about how your country rates, about global freedom trends, and why it matters here. 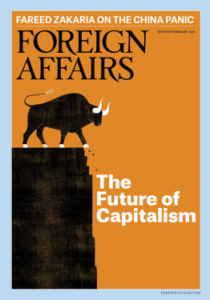 The Faustian bargain capitalism offers—riches and freedoms, at the price of stability, tradition, and community—has proved so attractive that ever more societies keep making it, Foreign Affairs observes. Now, having left its ideological competitors in the dust, the system is confronting its flaws, and the reckoning is not always pretty, according to contributors to the January/February issue on The Future of Capitalism.

The Center for International Private Enterprise’s Free Enterprise and Democracy Network (FEDN) provides a mechanism for private sector leaders and advocates of economic freedom across the world to exchange ideas and support, and make the case for democratic, prosperous societies.

FEDN’s experts advise and provide technical assistance on market reform in democratic transitions and participate in global fora such as the World Movement for Democracy and the Community of Democracies, where they help to frame understanding of priority issues concerning democracy and development.

CIPE is a partner of the National Endowment for Democracy (NED).