Authoritarian nation-states are using elements of their intelligence and military establishments, via cyber and disinformation operations, to interfere in democracies’ elections, notes Scott Bates, a former Senior Policy Advisor for the U.S. House of Representatives Homeland Security Committee who also taught at the National Defense University.

Partnerships to Protect Democracy: States vs. Nation-States https://t.co/XQuDVrZ3LU via @CNASdc

The threat we face is real. Authoritarian regimes have tested tactics that they can deploy to undermine confidence in the integrity of elections, he writes for the Center for a New American Security:

There is a strong moral and strategic case for putting the defense of liberal democracy and open societies at the heart of UK foreign policy, according to a new report from the London-based Foreign Policy Centre. The UK should take advantage of its new comparative diplomatic freedoms to be more nimble and able to take a lead on these issues, adds the report, which welcomes the Government’s commitment that ‘the UK will remain distinctively open and global, working with our allies as a problem-solving and burden-sharing nation, and argues that as an internationally focused middle power it should renew its commitment to a rule-based international order, putting in the hard yards behind the scenes working with partners and institutions both old and new to show it is still committed to multilateralism. 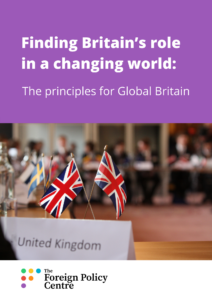 The UK’s Integrated Review of Security, Defence, Development and Foreign Policy takes place not only in the wake of Brexit, COVID-19 and economic turmoil but in the global context of eroding confidence in liberal democracy and the buckling of the rule-based world order, challenged by authoritarians such as revisionist powers Russia and China.