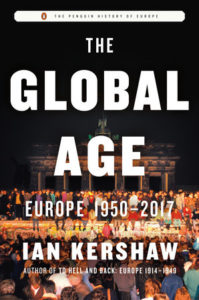 Some European Union member states from Central and Eastern Europe may now be at odds with Brussels, but “the European accession process was by far the most successful democracy promotion exercise in history,” notes a leading analyst.

For roughly forty years, the nations of what we used to call Western Europe were all bound together by a similar decision: as a group, they chose democracy over dictatorship, integration over nationalism, social market economics over state socialism, historian Anne Applebaum writes for The New York Review of Books.  In the name of fighting Soviet communism, and with the memory of World War II hanging over them, they accepted a set of liberal principles that some of them, most notably Nazi Germany and Fascist Italy, had rejected only a decade earlier, she notes, in a review of Ian Kershaw’s The Global Age: Europe 1950–2017:

Although, as Kershaw writes, the political systems varied from country to country, they were “built everywhere on principles of law, human rights and personal freedom,” along with “restructured capitalist economies” that created the basis for growth as well as the welfare state. These systems were also remarkably stable, thanks not least to a “widespread desire for ‘normality,’ for peace and quiet, for settled conditions after the immense upheaval, enormous dislocation and huge suffering during the war and its immediate aftermath.” Indeed, “stability was paramount for most people. As the ice formed on the Cold War, every country in Western Europe set a premium on internal stability.”

“[D]oubts about European values and concerns about European prosperity have haunted the continent for decades; Kershaw’s book is full of them,” adds Applebaum, a NED board member:

Yet there is something different about the current doubts, precisely because they threaten to undo Adenauer’s decision to choose integration, just at the moment when the forces that shaped Adenauer’s generation—the memory of fascism, the faith in America and its democracy, the confidence in market economies—seem to be fading. Nobody now in political office has any real memory of World War II. A generation that does not remember the cold war either will soon be in power.